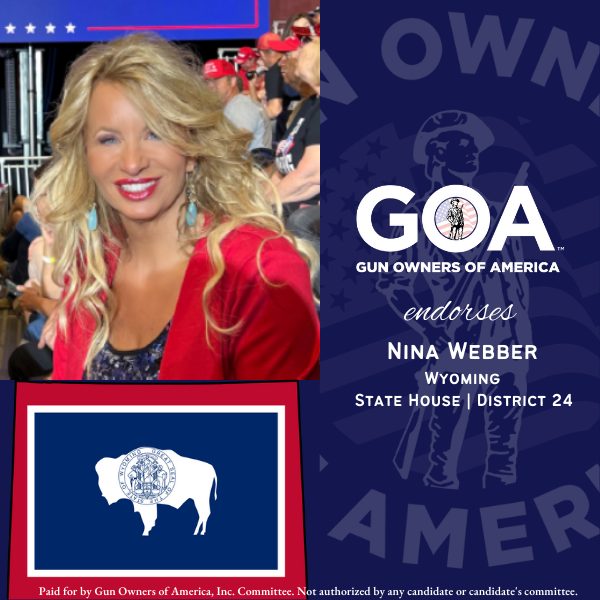 Nina has served as a County Clerk in Wyoming and as the National Committee Woman for the Wyoming Republican Party.

She has been an active voice in advocating for Second Amendment rights through speaking, email/phone campaigns, and attending legislative sessions and committee meetings.

During the 2022 Budget session, Nina worked alongside me to convince Legislators to vote for SF0102. The Wyoming Second Amendment Protection Act passed in March and makes it illegal for state or local officials to institute or cooperate with unconstitutional federal gun control. This law has the nation’s strongest criminal penalty of one year in jail for any official who violates the Constitutional rights of Wyoming citizens.

Nina’s platform makes a strong statement, “I SUPPORT AND WILL DEFEND THE SECOND AMENDMENT,” and she is committed to holding city, county, state, and federal elected officials accountable for any infringement on Second Amendment Rights.

GOA institutes a rigorous evaluation process involving a careful review of a candidate’s history and beliefs, and Nina scored 100% on her 2022 GOA candidate survey.

Here is what Nina had to say in her own words when describing what the Second Amendment means to her: “It is my God-given right to keep guns and ammunition and to protect myself, my family, my property, and my neighbors from bad guys, including a tyrannical government.”

Wyoming needs passionate and sound conservative voices in the State Legislature like Nina, so please be sure to vote for Nina Webber in the Republican Primary on August 16.

A vote for Nina Webber is a vote for Freedom and Liberty!

P.S. Please distribute this endorsement to your pro-Second Amendment family and friends and urge them to Vote for Nina Webber!