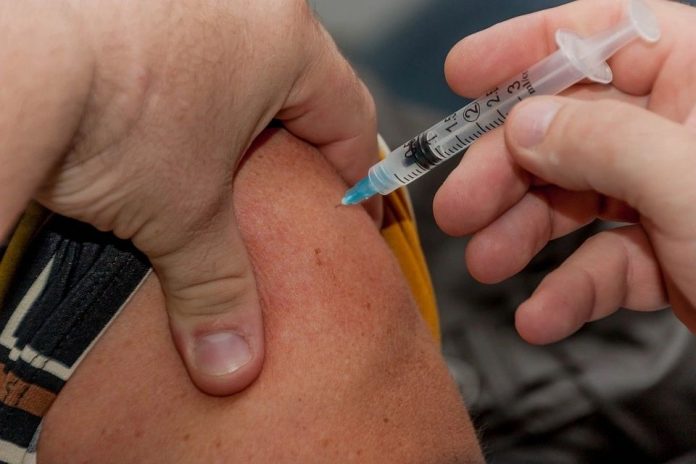 A federal judge granted a preliminary injunction yesterday against Biden’s shot mandate regarding federal contractors for three states. U.S. District Judge Gregory Van Tatenhove blocked the order at the request of the three attorneys general of Kentucky, Ohio, and Tennessee. The states sued Biden arguing that the mandate for companies that do business with the U.S. government violated the U.S. Constitution.

In his ruling Judge Van Tatenhove stated, “The question presented here is narrow. Can the president use congressionally delegated authority to manage the federal procurement of goods and services to impose vaccines on the employees of federal contractors and subcontractors? In all likelihood, the answer to that question is no.”

Judge Terry A. Doughty in the U.S. District Court Western District of Louisiana blocked the emergency regulation issued November 4 by the Centers for Medicare and Medicaid Services that would have required staff at providers that participate in the programs to receive at least one dose of a COVID-19 injection by December 6 and be fully vaccinated by January 4, 2022.

Louisiana was joined in the lawsuit by attorneys general in 13 other states which include Arizona, Alabama, Georgia, Idaho, Indiana, Kentucky, Mississippi, Montana, Ohio, Oklahoma, South Carolina, Utah and West Virginia.

Judge Doughty pointed out in his ruling that the Biden administration does not have the constitutional authority to go around Congress by issuing such a mandate. He wrote, “If the executive branch is allowed to usurp the power of the legislative branch to make laws, two of the three powers conferred by our Constitution would be in the same hands. If human nature and history teach anything, it is that civil liberties face grave risks when governments proclaim indefinite states of emergency…During a pandemic such as this one, it is even more important to safeguard the separation of powers set forth in our Constitution to avoid erosion of our liberties.”

The court also wrote, “The scope of this injunction will be nationwide, except for the states of Alaska, Arkansas, Iowa, Kansas, Missouri, New Hampshire, Nebraska, Wyoming, North Dakota, South Dakota, since these ten states are already under a preliminary injunction order dated November 29, 2021, out of the Eastern District of Missouri. This preliminary injunction shall remain in effect pending the final resolution of this case, or until further orders from this Court, the United States Court of Appeals for the Fifth Circuit, or the United States Supreme Court.”

The court indicated that Congress had not clearly authorized the Centers for Medicare & Medicaid to institute the mandate for Medicare and Medicaid providers.

“Congress did not clearly authorize CMS to enact this politically and economically vast, federalism-altering, and boundary-pushing mandate,” Judge Schelp wrote.

Liberty Counsel Founder and Chairman Mat Staver said, “It is promising that these federal judges are acknowledging that Biden has no authority to issue unlawful shot mandates to any person in America. It’s a matter of time before more courts rule against this administration’s agenda to force people to choose between their livelihood and religious beliefs and injecting an experimental drug into their bodies.” Liberty Counsel is a public law firm and a news partner with the Wyoming News.