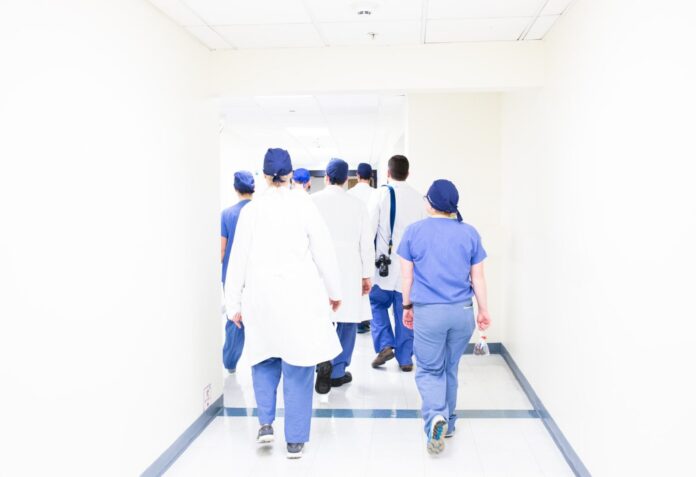 That was the chant from Dr. William Bay of Queensland, Australia as he was escorted out of an Australian Medical Association (AMA) conference last month.

Bay, who is with the Queensland People’s Protest, attended the conference and livestreamed a portion of it when he confronted his colleagues in attendance for continuing to follow the directives of Paul Kelly, Australia’s chief medical officer.

Kelly was speaking when Bay interrupted to accuse him of being a “liar” and “gaslighting all of you (doctors)” with regards to the experimental gene therapy COVID shots.

“I’m here today to ask you to join with the people of Australia and stop forcing these vaccines on people who are getting killed by them…. All (general practitioners), all doctors of Australia you are on notice by the people of Queensland,” Bay said to the audience.

Bay cited statistics that COVID has only a 0.27% fatality rate in Australia while citing a recent study showing those with natural immunity have 97.3% lifetime immunity from all variants making the shots unnecessary.

Because of his comments, Bay is now facing a loss of his medical license from the Australian Health Practitioner Regulation Agency (AHPRA).

The AHPRA has sent Bay a notice stating he has until Aug. 16 to provide a defense for why he shouldn’t have his licenses suspended. The notice claims that Bay’s comments require “immediate action” because it “poses a serious risk to persons” for causing “mistrust of vaccinations.”

“The statements by you, as recently as June 2022, have the potential to undermine public health directives and positions in relation to the Covid-19 vaccine. This conduct is of significant concern in circumstances where you appear to be relying on your position as a registered health practitioner to lend credibility to your position,” the notice states.

For Bay, his fight to spread the truth of the jabs is kind of a mea culpa for him, according to an interview he gave to Zeee Media last week.

Prior to the jabs even being available, Bay said he had concerns with the lockdown approach and the treatments being given to COVID patients. His concerns were dismissed as “unfounded” by his hospital, and he was told to seek psychological counseling.

After that initial dismissal of his concerns, Bay said he gave into the fear campaign. But after seeing how deadly the jabs have been, he could no longer stay silent.

“I was afraid, as many doctors are, because as soon as you get caught up in criticizing the mRNA vaccines, then all this fear and pressure from our colleagues and from the college and everybody starts coming down on you…. That was back in the day when I valued my job and my family and my security and my finances more than my patients, and I apologize for that and I’m sorry for that. And that’s what I’m trying to do now is to make up for my past mistakes by honoring the medical ethics that I ascribe to which is helping the patients first,” Bay said.

This type of bravery needs to become more prevalent among medical professionals, according to a whistleblower nurse.

“Be brave. Be bold. And step outside of your comfort zone. If you see something say something and think about future generations to come. If you don’t fight right now, then who’s going to do it? Who is going to fight?” Erin Maria Olzewski told Life Site News.

Olzewski documented fraud and abuse by the medical establishment as she was working at Elmhurst Hospital in New York during the height of the fear propaganda campaign in 2020. She worked as a travel nurse expecting to help patients during a pandemic but found out that what was occurring was a scam.

“If they needed nurses so badly, why are you bringing me here if there’s nurses sitting around?” Olzewski asked.

Eventually, Olzewski was assigned to Elmhurst which she called the “epicenter of the epicenter” for recorded COVID deaths. What she found was not a pandemic but rather murder. She said:

“The very first day [at Elmhurst] I was shocked. It was something I’ve never seen before. Patients were alone in the rooms on ventilators [with] no family allowed in [to advocate for them]. People were just dying from gross negligence, medical malpractice, [and] mismanagement. For me, that was really difficult to swallow. Everything made sense to me at that moment of why there were so many deaths in New York. I recorded them murdering patients. I recorded just the complete and absolute disregard for human life.”

Olzewski said the incentive was to provide deadly “treatments” that led to unnecessary deaths. The Department of Health and Human Services gave hospitals $13,000 for each patient classified as COVID and $39,000 more for hooking them up to deadly ventilators.

Still, to this day, there has been no justice for the victims of the medical tyranny which is why brave people need to continue to speak out.