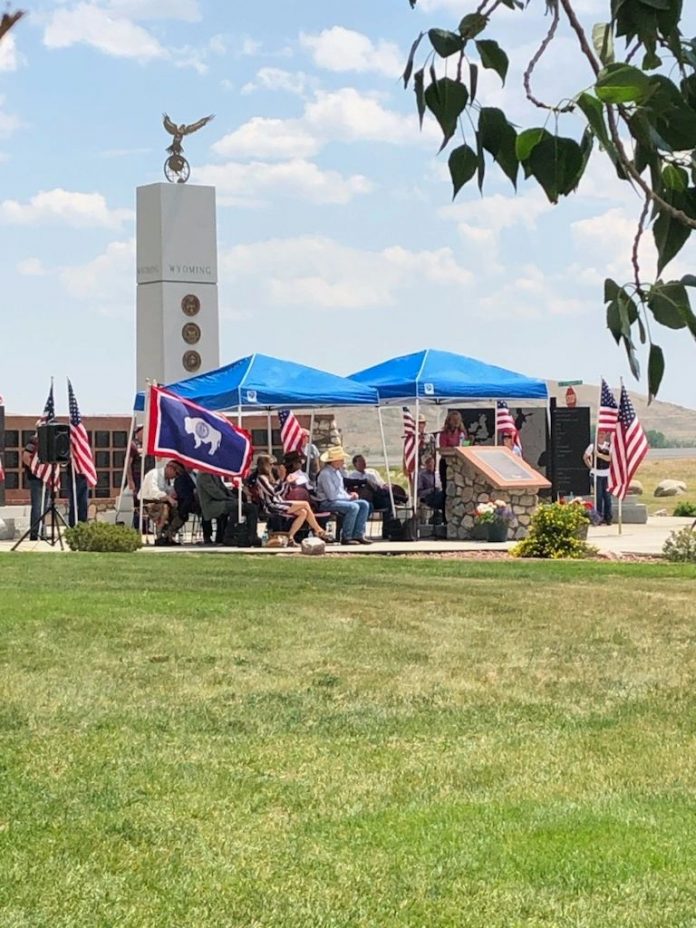 The Park County GOP’s Freedom Celebration once again highlights the freedoms that were won during the Revolutionary War that, to this day, is the reason that Americans have freedom.

The Event took place at 1:00 p.m located on the grounds of the State War Memorial Park.

The opening was surreal and patriotic chills ran down the crowd as some in the crowd were seen with tears in their eyes and, occasionaly, a tear would roll down their faces as Lisa Rollins sang the National Anthem.

The strong voice of Lisa Rollins and the sound of her professional voice projected American pride in the crowd.

The event, mainly organized by Carol Armstrong, was instrumental over the years in bringing this important event to Cody for multiple years.

A huge American flag flew over the event and could be seen fluttering and waving in the air, as if it was saying if flags could speak: “Stand up, America, God, Country,Guns and family and freedom, in that order.”

A flyover took place and was in part to honor former pilot Wally Zook, who passed away in 2020. Zook and his fellow pilot Bo Ewald conducted flyovers in the past. This year, the baton was passed to Bo Ewald and Drew Daniel.

At a specified time, two T-34’s suddenly appeared and flew over the crowd, with smoke trails flowing behind the Vietnam war fighter planes. The roar of the engines and the speed was exhilarating to watch. Less than 10,000 were manufactured during the war and it is estimated that only 58 still work and exist today. The celebration was not complete without bagpipes playing “Amazing Grace.”