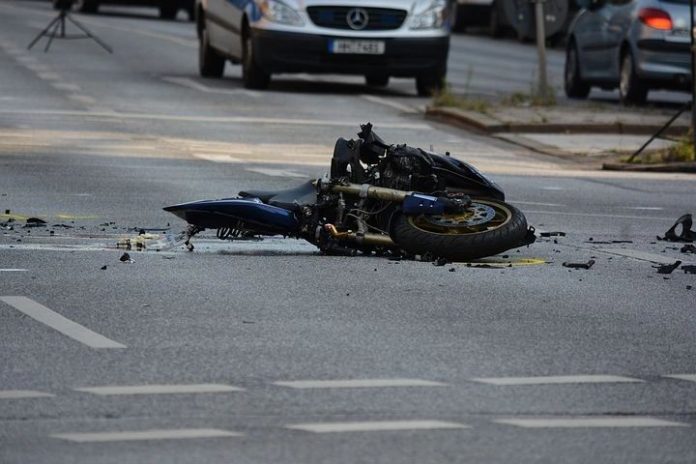 CHEYENNE, Wy — Thursday, August 5, at approximately 11:30 a.m. Cheyenne Police Officers responded to an incident at the intersection of East Lincolnway and Platte Avenue where a motorcyclist was struck by an oncoming vehicle.

The collision occurred as the driver of a 2012 Ford F -150 truck was attempting to make a left-hand turn from East Lincolnway onto Platte Avenue.

While making the turn, the truck collided with a 2013 Harley-Davidson Super Glide motorcycle traveling down Lincolnway from the opposite direction.

Responding officers discovered that the motorcyclist, a 70-year-old male of Cheyenne, was thrown from the bike and sustained serious injuries. He was transported to Cheyenne Regional Medical Center for treatment.

The truck driver, a 41-year-old male of Cheyenne, was cooperative and remained on-scene to assist officers with their investigation. Impairment is not being looked at as a factor in this collision.

•Allow motorcycles the full width of a lane at all times.

•Whether in a car or truck, or on a motorcycle — ALWAYS signal when changing lanes or merging with traffic.

•If you see a motorcycle with a signal on, be careful. Always ensure that the motorcycle is turning before proceeding.

•Check all mirrors and blind spots before changing lanes or merging with traffic, especially at intersections.

•Allow more follow distance — three to four seconds — when behind a motorcycle. This gives the rider more time to maneuver or stop in an emergency.

•Wear a helmet and other protective gear while riding.

•Use both hand and turn signals for every lane change or turn.

•Ride in the middle of the lane, where you are most visible to other drivers.

•Check your motorcycle before every ride, including tire pressure and tread, hand and foot brakes, headlights and signal indicators.

•Secure all cargo and balance the load on the motorcycle. Adjust the suspension and tire pressure to accommodate the extra weight as well.

•If you are riding with a passenger, have them mount the motorcycle after the engine has started. Passengers should sit as far forward as possible, directly behind the driver, and should keep both feet on the footrests at all times. Remind your passenger to keep their legs and feet away from the muffler.