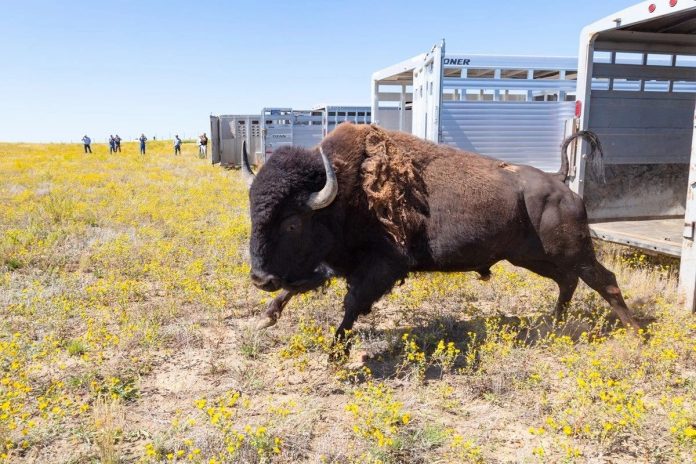 Release of 55 Yellowstone bison on the Fort Peck Indian Reservation.

According to a press release, there is not enough space for all the bison that qualify for the program. The first two phases of testing require that animals are held within state and federally approved quarantine facilities. There are currently two such facilities, one inside Yellowstone National Park and the other on private land leased by APHIS near the northern park boundary. Yellowstone wants to more than double the capacity of its facility.

Currently, the facility consists of a 10-acre pen that holds about 30 animals, and a 20-acre pen that holds about 70 animals. We want to divide the 20-acre pen in half and construct at least two additional pens. Each pen requires double fencing to prevent nose-to-nose contact. The water infrastructure must be reconstructed to provide the amount needed for the larger number of animals. We also need to construct a low-stress handling corral to support the increased testing that comes with more animals.

We will be able to increase capacity of the program from entering 100 animals to entering 250 animals over three-year intervals and increase the number of bison transferred to new areas from 30 to 80 animals per year. Yellowstone Forever, Greater Yellowstone Coalition, Defenders of Wildlife, and other nongovernmental organizations want to work with the National Park Service and Fort Peck tribes to help expand the program. They are supporting tribal engagement, transporting animals, improving public awareness, and helping to increase program capacity.