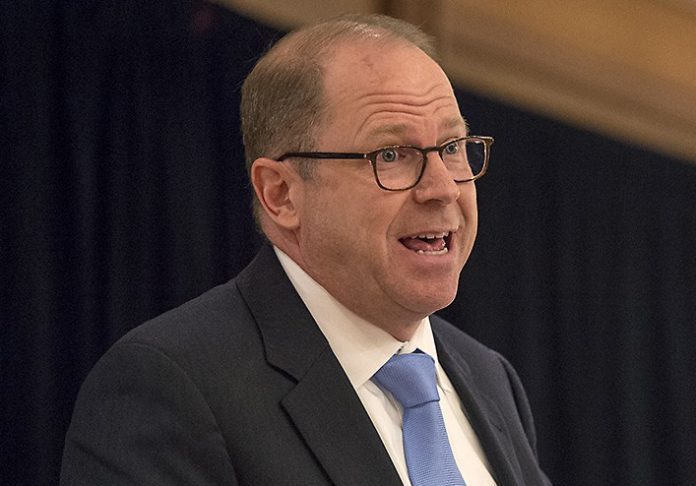 Governor Mark Gordon appointed Wyoming Secretary of State Ed Buchanan to be a District Court Judge for the Eighth Judicial District serving Goshen County. Secretary Buchanan will remain in office to fulfill his forthcoming duties and ensure a smooth transition before taking the bench.

“Goshen County is once again fortunate to have had outstanding candidates for this judgeship,” Governor Gordon said. “Ed has served the state admirably and honorably as Secretary for more than four years. His extensive legal background, his compassion for those in his community, and his passion for the law and our justice system will serve him well as a District Court judge in this next chapter of his public service career.”

“I am honored and humbled to receive this appointment from Governor Gordon,” Secretary Buchanan said. “I look forward to serving the citizens of the Eighth Judicial District and will work diligently to uphold the high standards of the judiciary.”

“It is a privilege to serve Wyoming and my fellow elected officials as Secretary of State. I would like to assure our citizens that I am committed to fulfilling my duties prior to assuming the bench, both to ensure a smooth and secure election cycle and to finalize the many projects integral to the office,” the Secretary added.

I saw this coming as soon as Boochanan announced that he would not be running for a second term as Secretary of State. So the nepotism and payoffs continue in the Cheyenne Swamp. Now Boochanan, who has worked his fingers to the bone for the good citizens of Wyoming for four whole years as Secretary of State, will reap the benefits of his labor. District Judges make between $151,000.00 and $172,000.00 per year for life…on the tax payers’ dimes. Ed can rest easy now, especially since he has done such a masterful con job of trying to convince the Wyoming electorate that their electronic voting machines are iron clad, fool proof and honest. We all know that.

He is in an even more powerful position now, from the bench, to ensure “smooth and secure election cycles” and maybe kick out any case that might promote the use of hand counting of ballots or the outing of electronic voting machines that Wyomingites do not trust.