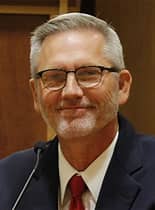 Things are heating up in the race for the Wyoming Governor’s race, as Republican Gubernatorial Republican Primary Candidate, Rex Rammell asked fellow candidate Brent Bien to step down out of the race so that votes would not be split up.

Rammell made his request during his closing statement and followed up with the allegation that Brent Bien did not meet the state constitutional requirements needed to run for the Governor’s office.

Candidate Brent Bien is a former Marine and during his service to the country, Bien states that he at all times kept his address as a Wyoming resident. According to the State Constitution, one must reside in the state of Wyoming for five years, Bien being in the military was exempt from such rule, however, Bien still kept his listed residency as Wyoming.

This is not Rex Rammell’s first political rodeo. Rammell made an attempted run for the Governors seat in 2018 as a Constitution Party Candidate and was defeated. Then-candidate Mark Gordon won the Governor’s seat by only about 34% of the vote, a narrow lead ahead of his opponents.

The debate that was held at the Central Wyoming College in Riverton Wyoming centered around issues such as COVID-19 Lockdowns, fuel prices, Wyoming’s economics to name a few.

Gov Mark Gordon is accused of being a RINO (Republican in name only) governor with whom many conservative voters have a beef. Yet Gordon indicated during the debate that he was very conservative and a true Republican.

Gordon admitted that things could have been done differently looking back on the past couple of years.

The most hated woman’s name came up during the debate. Liz Cheney. Rammell stated that Cheney was trouble from the time he met her when he performed veterinarian work for her in the past. She has not changed; nothing changed; Cheney has a dark cloud that follows her everywhere she goes in Wyoming. Nothing has changed