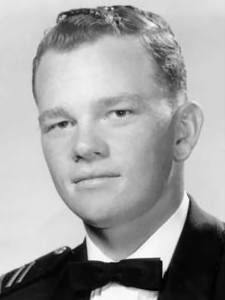 Fifty-Four years later, Worland man, then, 25-year-old Lt. Alva Ray Krogman is finally coming home to rest in his home town after being in a foreign country for 54 years.

Alva Krogman decided to get in the military to serve his country because he was a proud patriot who believed that every man, woman and child should have the God given right to be free, So Krogman joined the United Stated AIr Force and graduated in 1964 from the Academy.

The Bird that the Air Force gave him to fly was an O1-F Birddog, and that was what they sent him in when he was deployed to the 504th Tactical Air Support Group that was located in the south of Vietnam, mainly the Bien Hoa Air Base.

His assignment was to take off from the Nakhon Phanom Royal Thai AIr Force Base, based in the country of Thailand. Krogman’s plane was an unarmed bird. His mission was to do strictly reconnaissance and get a good birds-eye view of the southern area of Laos. Early in the morning, Krogman took to the air in hopes that he would return to base later that day. Unbeknownst to Alva Ray Krogman, this was to be his last flight.

On the morning of January 17, 1967, Krogman’s plane went down after being attacked by ground fire. Fourteen days later, Krogman was declared dead in action on January 31, 1967.

In 2019, a DPAA Recovery group found and located Krogman’s remains at the crash site that was located at Ban Kok Mak. One year later the US Government listed Alva Ray Krogman as accounted for on July 2020.

Alva Ray Krogman arrives in Billings, Montana, to a hero’s solemn and respectful welcome home. Two male nephews and one female niece, a generation difference away from their uncle will receive his remains, and will be accompanied by an Honor Guard, Montana Highway Patrol and riders of the Patriot Guard from both Montana and Wyoming. They that will escort Alva Ray Krogman home to his final and much-deserved resting place: Worland, Wyoming.

For those in the public who would like to pay their respects to Lt. Alva Ray Krogman, his procession route is the following:

At 2pm from the airport on Monday, 19, 2021, headed east towards main street, the procession will make a right turn on Main street headed towards the I-90 entrance in Lockwood, Montana. The procession will be on highway 212 and then intersect with Highway 310.

Lt. Alva Krogman’s procession will then head to Laurel, Montana, passing through the town of Bridger, Montana, headed for the Wyoming Border. Once at the border, the procession will continue, headed to Worland, Wyoming via through Frannie, Deaver, Powell, Cody, and on to his resting place in Worland, Wyoming. This all takes place on Monday July 19, 2021. At the cemetery, a multi-jet-fly-over with five military jets.

Montana and Wyoming residents, please show your respect for this War Hero returning home. This is not a political thing, nor a Democrat, or Republican thing. This is an American Patriot war hero being returned home to his final resting place. Let’s all get out and show our respect as he passes by this Coming Monday, July 19, 2021.