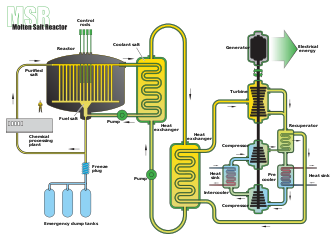 Today, multiple officials from the Counties of Lincoln and Uinta met with Government officials and business leaders, including representatives from the TerraPower and Rocky Mountain Power, to sit down and talk about the possibilities of bringing a Nuclear Power Plant to WYoming, mainly southwest Wyoming.

The Nuclear Power Plant that is being proposed for Wyoming is called an advanced nuclear reactor. This type of reactor does not use massive amounts of water to cool the rods, instead, this type of reactor uses a salt-cooled method, which is billed as being safer than the current reactors in various areas in the country.

So just how does a salt reactor work?

So are these reactors dangerous and bad for Wyoming, not exactly.

A molten-salt reactor (MSR) is a class of nuclear fission reactor in which the primary nuclear reactor coolant and/or the fuel is a molten-salt mixture. A key characteristic of MSRs is their operation at or close to atmospheric pressure, rather than the 75-150 times atmospheric pressure of typical light water reactors (LWR), hence reducing the large, expensive containment structures used for LWRs and eliminating hydrogen as a source of explosion risk. Another important benefit of MSRs is that they do not produce dangerous and radioactive fission gases that are under pressure, as they are naturally absorbed into the molten salt.

The Kemmerer City Administrator stated to the Power Plants that Kemmerer is way ahead of the curve, as the city has been planning to do something like this for years and already have planned for it years-ago.