Oath Keepers “Alleged Hacked List” NOTHING but a Fantasy 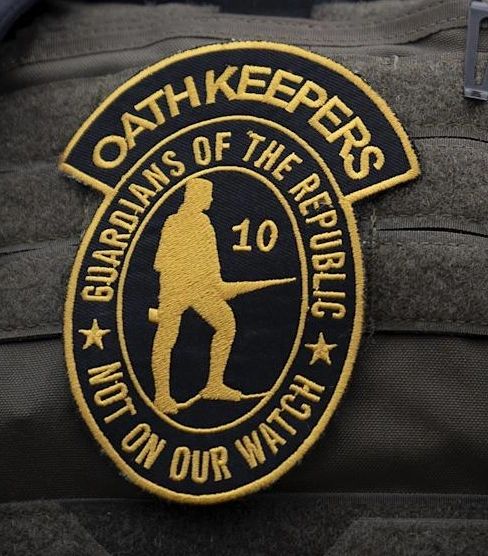 An article published by the WyoFIle, dated Dec 14, 2021 and written by Cooper McKim. In this article, the writer alleges that “Hacked” documents “Alleged” that Frank Eathorne is a far-right anti-government extremist group, along with former gubernatorial candidate Dr. Taylor Haynes.

The alleged allegations sound like it came directly from the pages of the Democrat left-wing Socialist party. Here we go again, “Russian Collusion” Russia Russia Russia false hype spun to appear as true when in fact the Hacked documents is nothing more that just that, Alleged allegations with no basis nor foundation of any truth.

The Wyoming News investigative reporters looked into multiple leads trying to prove that the state of Wyoming has “200 Wyoming citizens listed by a whistleblower group as members of the far-right anti-government Oath Keepers group.”

This statement that was written in the Wyofile article was just not substantiated, nor was there any proof of such a list. Since the list was “allegedly” from a hacked source, this would leave one to believe that yes, they made it up and it is a false accusation against multiple sound, Patriot minded, churchgoing, God loving, Wyoming citizens.

So if the DDOS (Distributed Denial of Secrets) got the alleged hacked list of Oath Keepers, then that means that the way the data was obtained if, in fact true, was by illegal means, (hacked) which would lead one to believe that possible Criminal activity was involved in obtaining information that belongs to someone else.

One reader of the Wyoming News suggested that just like the Russia Hoax! the Democrats are alive and will in the State of Wyoming and they are targeting such private and some public individuals to forward their radical Socialist Agenda.

It has held the Southern Poverty Law Center has a history of being a liberal Socialist arm of the Democrat party, according to many in the public. So as far as their credibility, you, the reader, decide for your self.

The article goes on to name names of private individuals in Wyoming alleged to have been an “Oath Keepers.”

Oath Keepers, at one point and time, had a limited digital footprint on the world wide web about 12 years ago. In the state of Wyoming, any such groups or individuals that did exist or may have existed long burned out over 10 years ago.

This article was to be in concert with you know who, the Socialist Democrat Liz Cheney who is barking like a rapid dog in heat, to go after anyone who promotes the Second Amendment, or believes in God, Guns and family and in that order. Liz Cheney’s connection to attack Wyoming people by dragging their names in mud will come back to bite her in the ass. She can not come back to Wyoming and think that all is well and the Wyoming people will go along to get along with her Socialist Democrat Scum agenda, NOPE, Liz Cheney according to media sources has to second guess herself when she comes to Wyoming as NO ONE LIKES HER! Perhaps, Liz Cheney is also on the list of OATH KEEPERS!

And yes the reason the United States has not become a Socialist or Communist country is because of all the God, fearing, Gun toting, Americans who can at a moment’s notice defend the Constitution of the United States, when their country goes haywire because of the radical Socialist Democrats. Many people are accused of many things in life, but to be accused of being an Oath Keepers, as if those were bad words. Being a Democrat is by far worse, they ARE trying to destroy America.

So, if you are a radical Socialist Democrat pushing a WOKE agenda, you are on massive lists that future upcoming authorities have compiled for prosecution perhaps down the road. Who knows? America needs to be far more worried about the Socialist Democrat agenda’s than any Oath Keepers fairy-tale. Yet the Study of Hate and Extremism at the California State University of San Bernardino, which is nothing but a liberal arm used by the Democrats, failed to list their own party as a terrorist organization filled with Extreme liberal Democrat wackos.

They listed more names in the Wyofile article, such as Ken Pendergraft, and Eathorne. Penderfgraft alleges he would not talk to the Wyofile as they are Liberal, and twisted and never speak the truth. Twisted ? Perhaps, but that information probably is in an “Alleged” “Hacked list.” and will have to be gotten illegally by the DDOS.

Another name that was highlighted was Dr. Taylor Haynes, whom according to the Wyofile article, is also on an Oath Keepers membership status. Dr. Haynes also did not respond to the Wyofile as he would not give them the time of day as he alleges that “they, Wyofile print words that don’t ring of any truth.”

As for Liz Cheney and her Jan 6 Insurrection bull shit, she has this waiting for her in Wyoming, where countless individuals will hold her accountable when she leaves D.C.

(a) A person commits perjury if, while under a lawfully administered oath or affirmation, he knowingly testifies falsely or makes a false affidavit, certificate, declaration, deposition or statement, in a judicial, legislative or administrative proceeding in which an oath or affirmation may be required by law, touching a matter material to a point in question.

Wyoming does not believe in the Laws for thee, but not for me, theory. Nope, Liz Cheney is a political, Criminal in the eyes of Wyoming voters and is listed as Socialist Democrat SCUM!

Also, let’s look at these real FACTS. The writer of the Wyofile is a member of the Wyoming Militia and so is Liz Cheney. Here is proof:

Of Whom Militia Constituted

The militia of the state shall consist of all able-bodied qualified residents of the state, and those nonresidents who are accepted into service, between the ages of seventeen (17) and seventy (70) years; except those exempted by the law of the United States or of the state. But all residents having scruples of conscience averse to bearing arms shall be excused therefrom upon conditions as shall be prescribed by law.[1]

According to this that means that the Wyofile writer, including Liz Cheney, is a member of the Wyoming Militia according to law. So perhaps before opening a worm box, and accusing others of being a member of a militia group, they forgot that they indeed ARE members of the Wyoming Militia under the color of the law in Wyoming. But this little detail was left out of the article. Hmmm…you the reader decide for yourself.