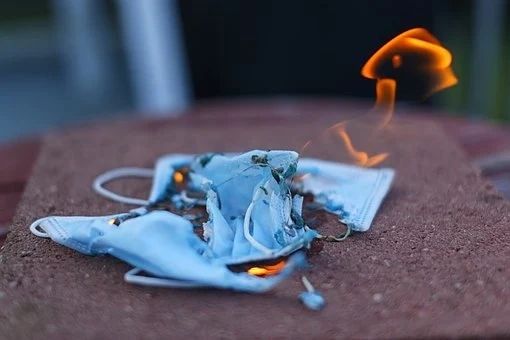 Every one knows, masks don’t work. But for those who just listen to the liberal spin and do not think using factual data, here is some hard cord medical science that the Liberal Democrats do not want the public to focus on and certainly not any of the Respondents/ Defendants in this federal lawsuit that the parents filed.

Medical facts show that the particle size COVID-19 virus is about 0.1 micron. This is significantly smaller than the diameter particles of 8-30 microns of a surgical, medical mask and or any of the silly fabric masks that people wear to cover their faces. In fact, there is no scientific basis to claim that any face coverings prevent the spread of COVID-19.

Based on this medical fact, any face mask policies that are imposed by School districts to force little children to wear 8 hours a day are so unnecessary for protecting children’s public health and welfare because COVID-19 really is not a health issue for little children, unlike what the liberal mainstream media and the liberal Democrats and the respondents/ Defendants would have the public believe.

In this federal lawsuit that Wyoming parents have filed, the Respondent school districts continued to maintain a FAKE policy so arbitrarily restrictive that even the parents who sought exemptions resulted in being ignored, denied outright, and violated multiple civil rights of the Petitioners.

The parents may make medical decisions for their children based on medical advice, not what the liberal WOKE, Socialist Domestic Terrorist, school board trustees want.

Law secures this decision in Article 1:38 of the Wyoming Constitution.

Yet the Respondent school districts named in this federal lawsuit continued to issue and force the population to abide by their made up fake mandates that would quarantine little children and school staff members for just being around another person more that 6 feet apart and or another individual that allegedly had COVID-19 virus, even if the individual was just asymptomatic.

Further, the Respondent/defendants in this case deliberately set out to name call, individuals who disagreed with the liberal mask mandate agenda, and referred to groups of parents and individual parents as “knuckleheads” to discredit the Wyoming parents who were simply exercising the fundamental Constitutional rights and these same Respondents / Defendants in this case choose to ignore the factual medical information supported by scientific and medical documentation.

The WOKE School board trustees wanted to create a fake illusion that a serious health threat existed to Wyoming children and that they wanted to create a communist totalitarian agenda to control the masses in Wyoming schools using these very atrocities.

This permanently damaged the very fabric of the Wyoming society.

When asked, most Wyoming people, will express to each other that “Democrats can go burn in hell.” Oh, don’t forget to take your masks with you.

You, the reader, decide for yourself.