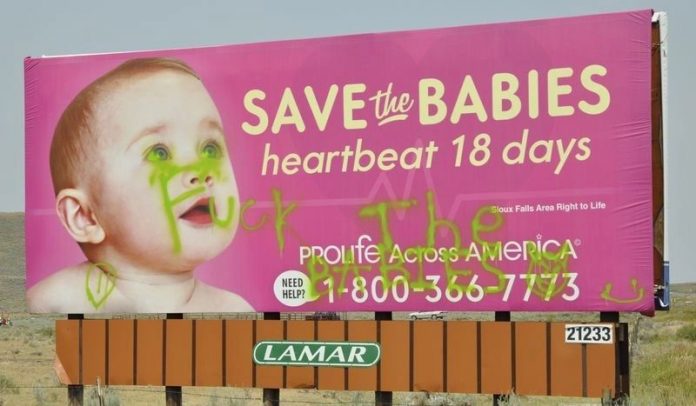 First reported by the Wyoming News, Vandals committed a cowardly act by spray painting “Fuck The Babies” on the right to life billboard just 5 miles North of Cody Wyoming. Go to (Audio Interviews) to here interview with Mary Keller from the Wyoming Rising, as they have a sign billboard on the other end of town saying, no room in Wyoming for hate. click this link to hear interview.https://wyomingnews.tv/audio-interviews

Larry French: stated: “The vandalism of the right to life sign North of Cody proves that evil people, are in our area. In my opinion ,they should be arrested and put in jail.

I hope they get caught.

By the same token if they would turn their heart to Jesus, he can forgive them and give them a new life. I hope they repent and are glad their mother chose life for them, not killing them. ”

Robin Berry, stated: “7/23/21Cody Wyoming.Sadly a sign supporting life was vandalized in our community. Was it disrespect for the message, for the property itself, for the people who value life? That is unclear. What is clear is that there is ‘new’ hate in our community. Hate that was not there before. When I became a resident here over twenty years ago, people were as I remember them growing up as a child; friendly, helpful, cheerful and loving. What this bad behavior tells me is that our children are indeed in trouble; not only ‘out there’ but here in Park County. When teens or young adults (because I cannot imagine someone doing this who has had any ‘life’ experience) are so moved to commit property damage to such a needed message in our world, we are all in trouble. Our children are in danger. Our children are pulled apart, literally, in the womb. They are force fed terribly improper notions in the public indoctrination system about things they should not have to be thinking about. No child should be thrown into the middle of inappropriate arguments about things of which they have no concept. Children should be loved, encouraged, taught their numbers and colors. They should not be exposed to the foulness of recreational ‘sex.’ Procreation was a beautiful act when God created the world and everything in it. It was for men and women to co-create children to be raised to respect God and their fellow Man. We as a race, have fallen far from God’s creation. Mankind has not only corrupted the world, but many of us have put on blinders to those who are corrupting the people of this world, especially those abusing our children. There was a time that we, as a race, were protective of our children and our women. We enacted laws to prevent their harm. Today, we encourage foul and improper acts throughout the world. We, as a society, say, “your body – your choice,” “to each his own,” “not my problem.” But to the small child being dismembered in the womb – there is no choice; to the children being used by pedophiles – they have no champion to protect them; to women kidnapped or sold by their own families into the sex slave trade – it is all of our problem. What have ‘we’ become? When hoodlums and foul mouthed degenerates are allowed to deface our town without repercussion, we are no better than those in the city who turn a blind eye, shrug their shoulders and say, I cannot do anything about it. Yes, you can. You can listen, you can watch and you can speak up. If you see something – say something. If you did this, confess. If you know who did this – tell the authorities. Stop being a part of the problem, of the hate. Loving and helping others is so much easier than plotting hateful acts against your fellow Man. You will live longer, you will feel better and you will help someone who needs help. At the end of the day; God knows you and what is in your heart and you will atone for that before Him. “Be Good, Be Kind, Be Smart. Love others because He loves you.”

Cal and Emily Brighton, Portland: stated: “I am shocked at what kind of person would do such a thing as the defacing a billboard that promotes life? My husband, I, and the grandchildren are traveling and enjoying our vacation when we came upon that sign. My heart sank not just because of the defacing of the sign, but the words that were painted on the sign.

If Cody, Wyoming, does not get a grip on this type of hate crime, they will soon slip rapidly into anarchy, just like the city of Portland, Oregon, with all the Antifa domestic terrorists who took over downtown Portland.

Cody: I pray you find the criminals who did this and that charges are filed against them.

Evil must be stopped in it’s tracks before it gets rooted in your little town.”