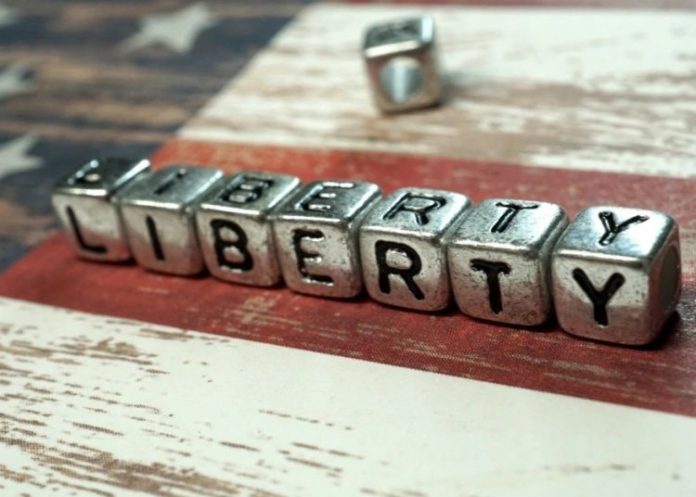 by Seth Hancock October 12, 2021 in Current Events, Opinion, US News

Laramie, WY — Grace Smith, a 16-year-old junior at Laramie High School in Wyoming, was handcuffed and fined for not wearing a face mask.

The arrest was captured in an Oct. 7 video. In it, Smith is heard continually saying “yes sir” and showing calm and politeness as the authoritarians follow orders.

Officer Jason Bellman, who exposes himself as a liar with the arrest, tells Smith that “at this point, I’m going to have to place you under arrest for trespassing.” Smith replies: “Ok.”

As Smith is being handcuffed, another officer is heard asking if she has “any guns, knives or bazookas?” The answer was of course no.

In a video from the previous day, Oct. 6, Andy Smith, Grace’s father, asks Bellman if he’d physically remove his daughter that day, when an out-of-school suspension (OSS) was issued, which Bellman clearly states “that will not be the case.” Bellman says the school will be put on lockdown and Grace “will be sitting wherever she wants to sit for as long as she wants to sit.” Bellman reneged on his word the following day.

“So, this is kind of where we’re at,” Bellman said. “So, she’s been suspended by the school, and she has no right to be here at this point. As well as you guys as well. You have no standing to be here as well.”

Oct. 6 was when this latest suspension saga began for the Smith family. Grace spoke with Republican State Senator Anthony Bouchard, who is challenging Liz Cheney in the 2022 U.S. Congressional primary, after being arrested and said this is now the third OSS while she has now been fined $1,000 for trespassing. Grace Smith is a straight A, honor student.

Andy Smith responds by noting that is an unlawful OSS and they are violating his daughter’s rights. Lewis and Yennie clearly imply they don’t care and tell them to call a lawyer.

“I’m sure that’s going to happen,” Andy Smith responds. “I’m just wanting to hear from your guys’ mouths that you’re willing to suspend my daughter, which is just absurd to me. I don’t understand, for her right to choose her own personal health choice.”

Yennie says: “Yes, I am willing to suspend her under our statutes and guidelines.”

“Thank you? That’s what you have to say?” Smith says adding: “She’s a great kid, she’s a wonderful student, she’s not doing anything to harm anybody, she’s not done anything unlawful, and all she wants to do is maintain her rights as a citizen of this state. And you are taking that away from her, and you have no right to do so. And the fact that you want to sit there and act like you have this great power, that’s you’re some kind of dictator. It’s unbelievable, sir. It’s ridiculous.”

“I’m sorry you feel that way,” Yennie responds to which Smith followed: “It’s not a feeling, it’s truth. It’s not about how I feel, it’s what’s actually happening.”

Knowing the school and district are acting lawlessly, Grace Smith courageously returned to learn the following day. In several Oct. 7 videos, Lewis is seen begging Smith “please don’t do this Grace” as she’s talking on the phone with her father explaining the threats of arrest that were made to her.

In another video, Smith is seen calmly sitting in the lobby as the school placed a staff member to keep the door locked specifically to keep her out. One student even asks “why is the door closed?” Even more appalling is we see that this is about control, not about protection, as another student is seen with a mask around his chin not covering his mouth or nose and was allowed in.

In that video, Bellman is exposed lying again when he claims Smith is the reason students are in lockdown.

No Bellman, you and the rest of the disgraceful school staff are the reason. And you no longer have the right to call yourself “law enforcement.” You’re a thug of the state.

One more video came out on Oct. 7, that of Smith’s parents following behind her as the cops perp walk her. Andy Smith states: “You all should be ashamed. All for a face mask. It’s despicable.”

Yes, everyone in this story is a disgrace, except for the Smith’s, especially Grace who stood up for liberty.

This Article was republished with permission by:https://thelibertyloft.com/2021/10/12/wyoming-high-school-goes-into-lockdown-over-polite-16-year-old-standing-for-liberty/

NEW YORK, NY – Liberty Counsel will appeal to the...