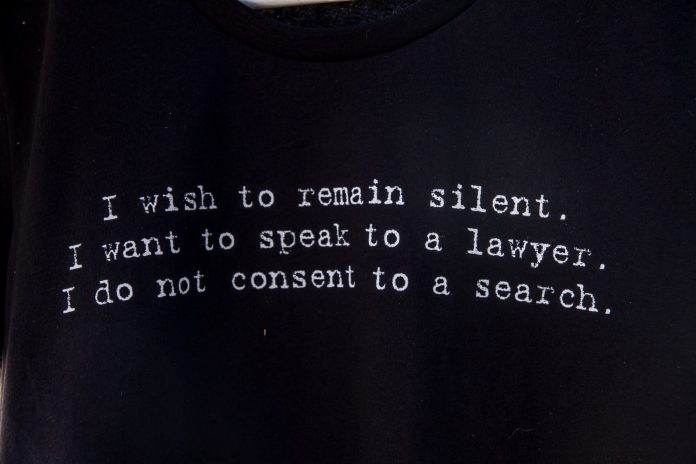 You have the right to remain silent, so use it.

A Delaware homeowner wished he had invoked his Fifth Amendment rights when two members of the Bureau of Alcohol, Tobacco, Firearms and Explosives (ATF) and a member of the Delaware State Police violated his Fourth Amendment rights with an illegal search of his two firearms he recently purchased legally.

Armed American News (AAN) reported on the incident earlier this week and spoke to the homeowner, who wished to remain anonymous. The encounter was captured on a doorbell camera which AAN provided the videos in its piece. A transcript of the encounter will be posted below.

“I was embarrassed,” the man told AAN. “My neighbors saw the whole thing – guys in these police vests standing in my yard. I was really uncomfortable. I felt really confused, like I was in some way being accused of something even though I didn’t commit a crime. It was quite embarrassing. I knew they couldn’t come in, but I didn’t know what to do. I didn’t want to get put on some watch list. We just got new gun laws here. I didn’t want them coming back again. I felt like they were invading my privacy.”

Motion detectors alerted the homeowner that trespassers were on his property prior to the doorbell camera starting. Before the armed agents of the state reached his door, the homeowner confronted the trespassers. The ATF agents said they were from a federal straw purchases task force, straw purchases being a citizen buying a gun for another citizen.

The ATF and the State Trooper admitted they had no warrant meaning they had absolutely no probable cause that a crime had been committed. They were there because they knew the homeowner purchased two guns, which they admit were legally purchased, and anytime an American purchases multiple firearms they will be investigated. The armed government thugs demanded they see the legally purchased guns, which they had no authority to demand.

This should be alarming on so, so many levels, chief among them being the knowledge that the government is intimately tracking American citizens’ firearm purchases.

Neither the ATF nor the Delaware State Police would comment on the incident when AAN contacted them. The armed thugs of the state did not have body cameras. Therefore, the only reason there’s some transparency is this homeowner had a doorbell camera.

ATF Agent 1 – “All I’m doing is verifying that you have it, you got two different purchases. If you have them, I’m out of here. That’s how quick it is. Yeah. Do you have them with you by any chance?”

Agent 1 – “If you can unload them and bring them out, or if you can go out to your foyer here, check them out, write the serial numbers and we’re out of here.”

Trooper – “The reason we’re out here is obviously gun violence is at an uptick. So, we want to make sure – we’ve been having a lot of issues with straw purchases. One of the things, indicators we get is someone making a large gun purchase, and then a lot of times we’ve been there and ‘Oh, those guns got taken.’”

Agent 1 – “The idea is that when you purchase more than two guns at a time it generates a multiple sales report and it comes to us and we have to check them out. That’s all that is. You did nothing wrong – absolutely zero.  I noticed you were stopped in Philly though with one of your guns?”

Agent 1 – “Oh no. It just came up. We came here, look, I’m telling you. There’s an email from the federal side saying, ‘Can you make sure this guy’s got his guns.’ If you recently purchased a whole bunch of guns, if we can look at them and just scratch them off…”

Homeowner – “I have them all.”

Agent 2 – “We can look at them and write which ones you just bought, so we can save a trip from coming back. We’ll confirm that you have them.”

Trooper – “We will wait out here. We will stay out here. You can lock yourself in there.”

Homeowner – “It just I got my little boy in there and my wife.”

The homeowner agrees to retrieve his guns. As he’s inside:

This encounter serves as an example of why citizens need to assert their fifth amendment right to remain silent. These government agents were trespassing. They had no authority to be on this homeowner’s private property.

If police show up to your home to ask you questions, first ask if there’s a search warrant. If there is no warrant, then respectfully tell them that they are trespassing and need to leave your property. Also, make sure to always record the encounter whenever possible.

Why is it important to not talk to the police? James Duane, a law professor at Regent University, provided the reason in a piece for Learn Liberty.

Duane notes that he’s spoken to man law classes on many campuses, and there’s almost always several students who have parents who are cops. He always asks them what their parents tell them about talking to the police, and the answer is always to never talk to the police. That’s right, the police warn their own children to never talk to cops.

The public all too often believe if they’ve done nothing wrong, there’s no harm to talk to the police. That’s false, as Duane notes the right to remain silent is important for both the guilty and innocent. He provided four reasons why innocent people are convicted.

The first is the average American doesn’t know the law. There are tens of thousands of crimes on the books, often time criminalizing conduct that nobody would think is illegal.

The second is criminal coincidences. An innocent person could provide truthful information that coincidentally ties them to a crime, like they could admit to being in the location where a crime may have been committed not know what the police know about the crime.

The third is that other people lie and make mistakes. You may truthfully tell a cop you were not at a particular location, but an eyewitness may have pegged you mistakenly or even lying. That becomes a “your word against their word” situation, and even though you were the truthful one, the police can charge you with lying in an investigation using that mistaken or lying witness as their evidence.

The fourth reason is that the police are allowed to lie to you, and they do. Cops are trained to lie. As Duane notes, “our courts allow and encourage officers to lie to you if that will help encourage you to waive your right to remain silent.”

“It is a national disgrace that our legal system so often convicts and imprisons innocent people for crimes they did not commit, often for the rest of their lives. And in many of these cases, the critical evidence — sometimes the only evidence — was truthful information that some innocent person voluntarily gave the police, because they foolishly thought they had nothing to lose by giving up the right to remain silent.”

“Don’t make that mistake. Take the advice police officers give their own children. If an officer asks whether you are willing to answer a few questions, don’t be rude. But let the officer know that, with all due respect, you must decline to answer his questions. Ask him if you are free to leave, or whether you are under arrest. If you are not under arrest, wish him well and walk away. If he tells you that you are under arrest, tell him that you will not speak with him unless you have an attorney present.”