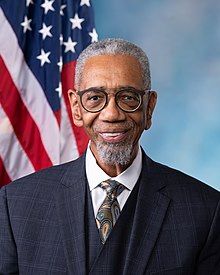 Democrat Bobby Rush from Illinois, is now 75-years-old. He actually beat Barack Obama, the then Senator of Illinois, in a 2000 congressional primary. Later in 2004, the Democrat arrested for blocking a driveway at the Sudan Embassy. Rush called it just a “protest.”

Then, in 2012, Rush deliberately wore a hooded hoodie on the Congressional House Floor, violating Chamber rules of wearing a hat in the Chamber.

Bobby Rush also was a full fledged member of the Black Panther Party.

Going back in history, Bobby Rush arrested, convicted on weapons charges in 1969.

American voters have had enough of the Democrat, Socialist, Woke leadership in both the House and the Senate, including the soon to be Dementia patient, Joe Biden. Maybe Democrat acting, Liz Cheney, from Wyoming can join her Black Panther close friend and live in Illinois, because in Wyoming, NO ONE LIKES LIZ CHENEY! Finally, Bobby Rush lets go of his 30 year hold on the House seat.