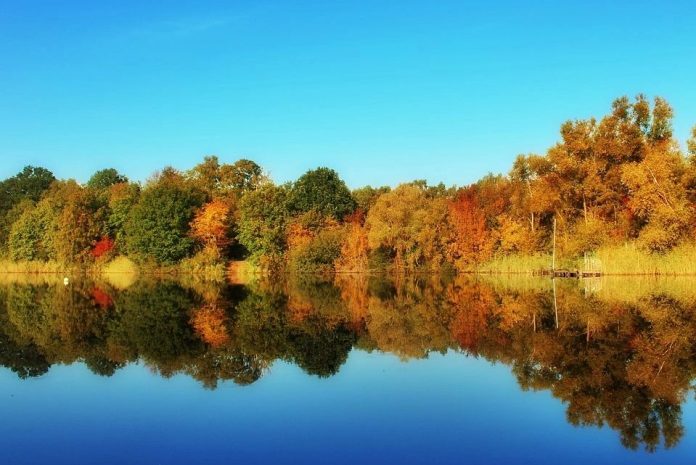 By: Marc Kelley
Montana is a wonderful place, four distinct seasons allow the scenic views which abound to change noticeably, each offering their unique and beautiful features.

In a time, not that long ago when conversation was not driven by political correctness, one would often hear this time of year described as, “Indian Summer.” Most of us who live on the high plains of the west, have come to associate this term with the warm, hazy days of autumn. Fall colors abound, animals move about freely, feasting upon the bounty of the harvest, and growing their thick winter coats. The time for hunting and gathering is upon us. Life is easy, the sun warms our bones, and we are grateful for the time at hand.

The exact origin of the term “Indian Summer” has been debated for centuries, has too, the exact meaning of the term. The literal interpretation speaks to the explosion of Autumns colors, warm days with just a hint of a chill in the air. A time to embrace a quieter pace, enjoy an early morning coffee as the sun rises, illuminating ruby and golden hues. It’s a beautiful time of year, and for many of us, our favorite time of year.

Yet for another age group, “Indian Summer” is emblematic of a lifetime of seasons long past. A time to reflect and appreciate memories lived long ago, thoughts of a simpler time, when not everything was viewed through the myopic lens of politics. A chance to reminisce about the days of our youth, hunting Green Wing Teal on the banks of the Missouri River, sharpening our shooting skills, and waiting anxiously for the flights of the big northern Canadian Geese to begin their migration. It is the perfect time to prepare for the harsh winter conditions we all know are coming, yet to enjoy the thoughts which remain in the back of our minds, never ignored, nor dismissed, but rather, respected for their inevitability.

It has become far too easy to allow the negative news which pours from the mouths of a dishonest media and a corrupt political class like acid eroding our country, to color the truth about America and her people. America is a beautiful place, defined not by the inner city scourge brought upon by decades of mismanagement and graft; but rather, by the vast natural beauty which is America, and the honest, hardworking people who love her.

Last weekend as several friends and customers stopped by to visit, and as we often jokingly say, we’re once again working to solve the problems facing our country. About an hour into our fulminations, my friend Scott Jones called and asked if he could stop by. Scott, is an amateur, but skilled photographer, with a very good eye, and an innate ability to capture the beauty of our great state. Scott was anxious to show me some of his latest work and when he arrived and began showing his latest photographs, we were all taken by the shear beauty he had captured.

Scott is a Godly man, generous, honest, and open about his feelings concerning freedom and liberty. After suffering an injury at work, Scott found himself with too much time on his hands and sick of the negativity which seemed to be everywhere he turned. Rather than feeling sorry for himself, Scott made a conscious decision to change his situation. He picked up his camera and headed outside, driving along the Yellowstone River searching for interesting views. Scott did not have to venture far and after traveling only a few miles from Billings, found himself at the Four Dances Nature Area, overlooking the Yellowstone Valley.

Taken by the shear beauty of my own backyard, I asked Scott if I could share one of his photos in this week’s catalog. As I researched The Four Dances Nature Area, I learned this scenic region has long been considered “Holy Ground” by the Crow Nation. During the 1830’s, and at the height of inter-tribal wars, this area was often visited by Crow leaders, seeking guidance for the problems they faced, as they fasted and performed religious rituals. History has recorded, Chief Four Dances, took his name from a vision he experienced while fasting and praying at this site. The message of hope seems as clear today, as it was to Chief Four Dances nearly 200 years ago. Today, as many people struggle to find the answers to the negativity which is seemingly everywhere we turn, it is the Good Lord who once again provides the messages of hope. We should all take a page from the life of Chief Four Dances. Hope is real, hope is alive and “Indian Summer”, is the perfect time to get away, turn off your cell phone and see for yourself….America the Beautiful.