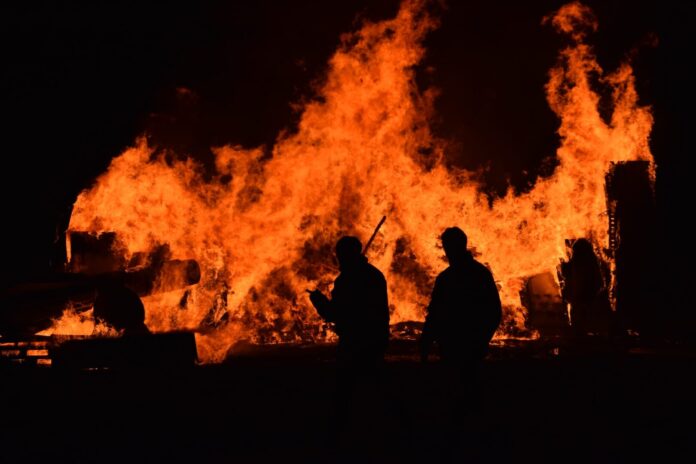 “The government is good at one thing. It knows how to break your legs, and then hand you a crutch and say, ‘See if it weren’t for the government, you wouldn’t be able to walk.’”—Harry Browne, former Libertarian Party presidential candidate

In April, the United States Forest Service (USFS) started what was supposed to be a controlled burn which turned into the largest wildfire in New Mexico history resulting in the destruction of 432 homes and 341,000 acres.

The wildfire, named the Hermit’s Peak Calf Canyon fire, took place east of Santa Fe, and a USFS report admits to its guilt. Now innocent homeowners who have lost their homes, land and more are finding out how criminal the federal government is as they are being asked to share the cost for the destruction caused by the government.

The Federal Emergency Management Agency (FEMA) has paid out $4.2 million to a combined 1,164 survivors of the blaze equating to $3,608 per citizen.

Reuters recently spoke to victims of the government’s arson, and they are not happy with the response, especially considering President Joe Biden traveled to New Mexico in June and lied saying: “Today, I’m announcing the federal government’s covering 100% of the cost.”

However, the federal relief programs available to the victims have cost-sharing statutes, even though the government is fully to blame. The Emergency Forest Restoration Program requires the victims to share at least 25% of the costs, and victims are limited to “$500,000 per person or legal entity per disaster.”

Many New Mexicans are now living in tents or campers on their land, like Daniel Encinias whose family of five, including his wife and three children, live in a trailer next to the ashes caused by the government.

Along with loss of his five-bedroom home and 8 acres of land, Encinias lost cattle killed in the fire and has had to purchase new hay to feed his remaining cattle after the blaze destroyed the food supply. He also lost cars and farm equipment.

Encinias is now living off a maximum payout of $37,000 from FEMA. He’s submitted an application to receive more and is being told he’ll have to wait at least 6 months to a year, and he’s now considering joining a lawsuit.

“Why the hell am I going to pay anything when I didn't cause this damn fire?” Encinias told Reuters. He added: “I’m hoping that finally something works out where it helps the people.”

Leger Fernandez, another victim of the blaze, said: “The federal government burns your house down so they are responsible in my mind to pay 100% of the cost of rebuilding.”

Reuters reported on the USFS report in June which detailed “poorly trained and equipped USFS employees” who were “focused on complying with agency policy rather than adapting burn plans to changing environmental conditions.”

Although accepting its incompetence, the USFS found a convenient boogeyman to pass off the blame to, that being climate change.

Meanwhile, as victims deal with the pitiful funds from the government arsons, they have yet to receive an apology from the feds, according to lawyer Antonia Roybal-Mack who is preparing a lawsuit.

“The lack of apology, the lack of recognition that forest management has taken a wrong turn in this country is the real crisis hear,” Roybal-Mack said.

Such incidents are not new for the government as The Free Thought Project (TFTP) noted with regards to an innocent woman whose home was blown up by a SWAT team two years ago. TFPT reported:

“We’ve seen similar scenarios unfold within the police state when SWAT teams destroy the homes of innocent people and then tell them they are on the hook for the bill. In July of 2020, Vicki Baker, 75, was told she had to cover the $50,000 in damages to her home after police literally blew it up looking for a suspect. It would take her two years to finally get her money back.”