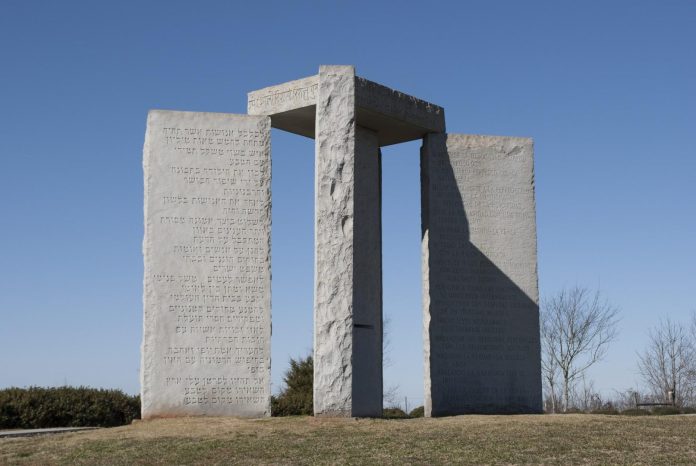 The Georgia Guidestones was destroyed last Wednesday in Elberton, Georgia after the Georgia Bureau of Investigations alleged someone set off an explosive device.

The explosion created safety hazard leading to government officials to demolish what remained.

For likely most Americans, they probably never even heard of the Georgia Guidestones until last week. Why? The mainstream media ignored its existence.

For background, the monument devoted to promotion of a depopulation agenda was commissioned in 1979 and constructed in 1980 by a man using the pseudonym R.C. Christian. The individual who commissioned the monument said he was doing it on behalf of an anonymous group, according to the banker Wyatt Martin who spoke with Christian.

The monument was initially constructed on private land, but Christian eventually transferred that land to Elberton County.

The Georgia Guidestones consisted of four granite slabs laid out in a way reminiscent to Stonehenge in England. The Guidestones, however, are engraved in what is best described as the globalist 10 commandments.

Engraved, in eight different languages, was this:

The mainstream media suddenly acknowledged the existence of this disgusting monument last week after the destruction of it. Wyoming News did a search of the term “Georgia Guidestones” on a few mainstream media outlets’ websites and found that CNN, Fox News, MSNBC, ABC and CBS had not once ever referenced the monument prior to last week’s events.

But more importantly, even in their coverage of it they left out the 10 statements from above. Instead, all of them described the “conspiracy theories” that have surrounded the monument for years as they ridicule people who dare to have thoughts not in the mainstream.

There are conspiracy theories surrounding the monument, including from the mainstream narrative media itself. We don’t know who Christian is nor the mysterious group he affiliated with. Certainly, people will come up with thoughts, and that’s perfectly fine to express them.

But the most important thing is that it’s not a theory to say there’s a depopulation agenda behind in and that the same agenda is shared by so many global elites. It’s right there in plain language on the Georgia Guidestones, and from the mouths of the globalists. Just consider the first statement of maintaining a world population of no more than 500 million. That would mean we need to kill off 7.5 billion of the world’s current 8 billion people, 4 billion of the 4.5 billion at the time of the construction of that heinous monument.

The COVID Blog noted, on the mainstream’s conspiracy theories of who set off the explosion last week, that “videos of the incident went viral. Critical thinkers immediately wondered how the video of the explosion was captured, but there is no footage of the explosives actually being placed there (except for a car driving away from the scene after the explosion).”

What’s not a symbol is the depopulation agenda, which is not a theory but a fact, that’s playing out daily. We are witnessing it with the destruction of supply chains and food supplies, the push for digital currency where all of your purchases will be tracked and we’re seeing it with the COVID jab program.

The COVID Blog estimated a 150 to 200 million number in excess deaths in 2022, based on data coming out from the life insurance industry. The Exposé has reported on several studies linking increases in infertility rates associated with the experimental gene therapy shots.

And let’s just listen to the words of one globalist, Bill Gates, who has been a proponent of the jab regime.

Gates, in 2010, gave a TED Talk as he discussed how the world is overpopulated and described how there needs to be a new way of “vaccination” (hint, hint: mRNA). He said: “If we do a really great job on new vaccines, healthcare, reproductive health services we could lower (the population) by perhaps 10 or 15 percent.”

The depopulation agenda isn’t a theory, it’s in our faces. The Georgia Guidestones should serve only as a reminder that this evil agenda exists, and we have to be vigilant.