​’NO VACANCY’ Based On True Story Fighting For The Homeless 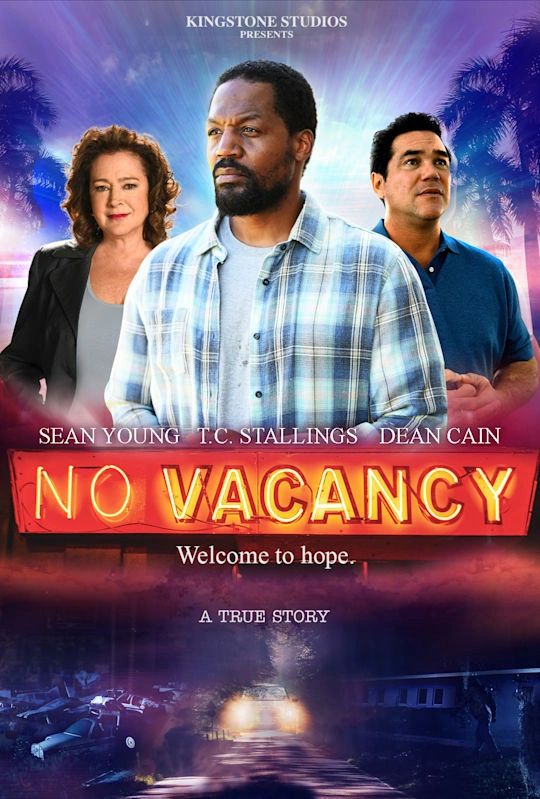 FILM 'NO VACANCY' IS BASED ON A TRUE STORY ABOUT FIGHTING FOR THE HOMELESS
New Film Starring Sean Young, T.C. Stallings and Dean Cain
Premieres Nationwide through Fathom Events on May 9 for One Night Only!
KingstoneStudios.com

LEESBURG, FLORIDA – March 31, 2022 – An uplifting film for the whole family and based on a true story, NO VACANCY follows a jaded reporter demoted to a rural news bureau who finds her cynicism slowly transformed as she befriends a recovering addict and writes about a church struggling to purchase a motel for homeless families.

“In a time of bitter division and acrimony in our country, our creative team thought it was an appropriate time to release a movie based on the true story of a community coming together in a literally miraculous way,” said Art Ayris, CEO of Kingstone Studios, which produced the film. “The Orlando ABC affiliate had previously done eight feature stories plus M6 in France and Japan’s Nippon television had all journeyed to Florida to do stories. We realized this was a story with appeal far beyond central Florida and needed to be told in a way that only a motion picture can communicate. Though the movie has a few fictional components and characters, it is closely based on the true story,” Ayris added.

Distributed by Fathom Events, NO VACANCY is directed by Kyle Saylors. His documentary KIMJONIGILA was the first film ever screened at the U.S. Capitol private theater and led to a congressional hearing and the first sanctions against the North Korean prison camps.

NO VACANCY is written by Ayris, whose production credits include Best TV Movie Hollywood’s Next Success contest; Best Feature Florida Film & Television; Best Feature Angel Awards, graphic adaptation, for SONY Affirm theatrical release The Remaining; and over 60 comic, animation and film credits. Ayris served as executive editor of the Kingstone Bible, which was a finalist for Christian Book of the Year in the Children’s Category.

FILM SYNOPSIS
News reporter Brandi Michaels finds the 2007 economic and housing collapse in central Florida an apt metaphor for her turbulent life. If a looming divorce and her mother’s Alzheimer’s were not enough, her journalistic dreams are devastated when she is demoted from Orlando to a rural outpost. But when her editor sends Brandi to cover a story on a church struggling to purchase a motel for homeless families during the Great Recession, she finds her cynical news persona challenged as she encounters Cecil, a winsome former drug addict, and sees for herself the selfless and epic struggle of the church as it seeks to take care of the homeless in their community. Her coverage of the story eventually helps the church overcome the opposition to acquire the motel and also plays a role in Brandi’s personal redemption as she witnesses first-hand the stories of all those involved. Her article becomes an award-winning piece, serving as a catalytic model to helping homeless families in other communities, and gives her the journalistic impact she had craved all along. Based on the true story of First Baptist Leesburg, Cecil Johnson and the Samaritan Inn.

First Baptist Leesburg’s story has been featured in several documentaries including 2018’s COME ALIVE. The Samaritan Inn is a real motel converted into use for homeless families that stays full every night of the year.

Find locations near you and buy tickets for NO VACANCY at: FathomEvents.com

Judge Says, Christian Flag Can And Will Be Flown At Boston...