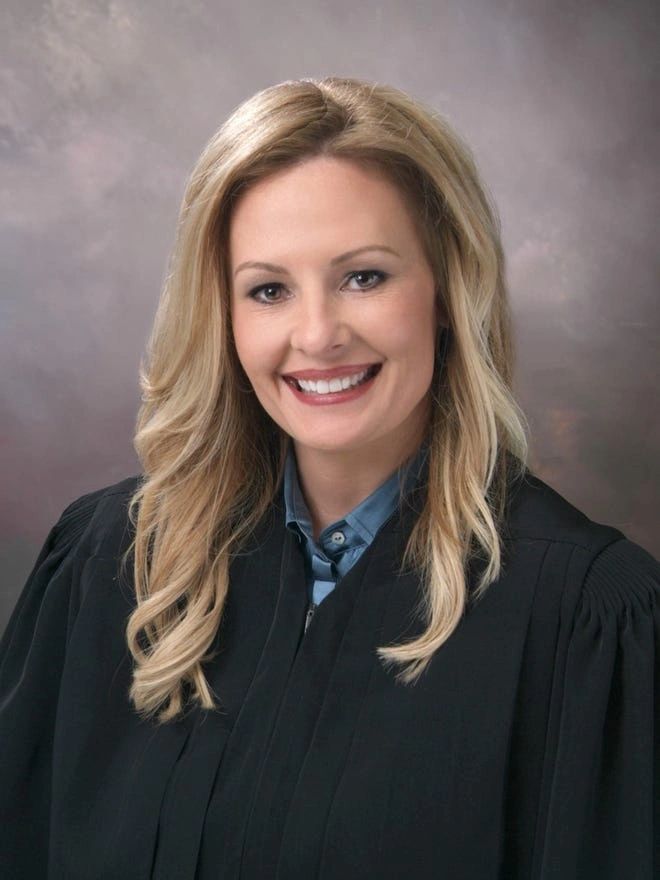 The Parent of the Michigan teenager boy who is charged with shooting four of his fellow students at the Oxford High School in Detroit, Michigan, arrested and charged themselves for the crimes that their son committed at the Oxford School.

An over zealous Democrat WOKE prosecutor charged James and Jennifer Crumbley with four counts of involuntary manslaughter. During a Jail house Zoom hearing, the mother of the boy, Jennifer Crumbley, cried and was distraught as the judge asked her some questions. The mother, Jennifer Crumbley, was so distraught that it appeared as if she was struggling to even make any verbal response. Mrs. Crumbley could barely speak. She pleaded “Not Guilty.”

The father, James Crumbley, was also distraught at the jail house zoom hearing. James Crumley shook his head when the judge read the charges, accusing both he and his wife of allowing the boy to have access to the gun.

The Judge, Julie Nicholson, placed a half a million dollar bond on both the husband and wife and if they got out by posting bond, she ordered them to each wear a GPS device at their expense.

Early this morning, defense attorneys for both parents accused the prosecution of “Cherry Picking” facts that the prosecutor released to the media, creating a false narrative of facts to sway any potential jurors.

The prosecutor’s name is Karen McDonald, a known liberal Democrat whom other defense lawyers have accused in past cases of stretching the facts or just making things up as she went along.

Defense attorney, Shannon Smith, is accusing states that the Oakland County prosecutor Karen McDonald is trying to hold the parents responsible for the sins of the boy, such as, prosecutor Karen McDonald’s office filed Friday charges that accused both parents of failing to “intervene” or “control” the tragedy as if the parents had knowledge for the future actions of their son.

According to charging documents, the teenage boy had written a message on his desk that stated “Blood everywhere.” The school called the parents to the school office about the message. The parents, according to defense attorneys, had no knowledge, or could have knowledge of their boy’s plans later that day.

Yet the prosecutor maintains it is the Crumbley parents , who committed the “egregious act.”

One wonders what they did that was such an egregious act?

Raising a teenage boy who is being rebellious, out of control and defiant to authorities at the school?

What parent has not had defiant, rebellious, out-of-control teenagers in their life?

According to the Defense attorneys’ just because the father bought a gun, had the gun locked up and secured and Defense attorney again stated that the gun “Was, locked up.” Yet the boy somehow could access the gun or figured out the code or unlocked the gun case using a key he stole or whatever happened. How can the parents be-held responsible, criminally?

Sense when do we arrest parents for the crimes of their children at school?

The prosecutor blames the parents for fighting to keep their child in school instead of the school just throwing up their hands and kicking the kids out. What parent in America would not do the same?

Defense lawyers stated to the media that their clients had to leave town for their own safety because they were getting death threats and if they would have stayed at their home, mad people would have killed them.

So they left town but were planning to be back to deal with the charges that had been-filed on Friday.

Never have they have charged American parents in school shooting that their kids had involvement with.

According to many school violence experts across the country, when minors can access guns from home, or on their own means, never are the parents charged for crimes that they did not commit. Just because a family member commits a crime does not mean all family members need to be charged as well.

If parents purchase a car from a dealership or it is a private sale, accompanied by the teenager, and the teenager later steals the car and then goes on a wild drive, committing multiple crimes, possibly even running over or causing an accident that results in a fatality, never are the parents charged. They did not commit the crimes. The child did.

This prosecutor is out-of-control.

Now the DUMB prosecutor is also looking at charging some school officials. Superintendent Tim Throne, acknowledged at the time of the meeting with the Crumbley parents about their son with other school officials present, Throne stated that “no discipline warranted.”

Prosecutor Jane McDonald stated when asked if they might charge school officials because either they had knowledge that the teen boy might bring a gun to school or that because he wasn’t disciplined properly commented, “The investigation is ongoing.” but alluded it might be a possibility.

What is up is down and what is down is up.

None of this makes sense, and the act was indeed horrible. So let’s charged the government who made the money for the father to go purchase the gun, aren’t they not liable and did they not commit an “egregious act” by making the money available to the father and if they would have not allowed access to this money that they printed and created, this crime would have never happened. According to the prosecutor, Karen McDonald’s, legal theories, this makes legal sense.

Yea, this prosecutor is NUTS !

Both parents plead not guilty early this morning.