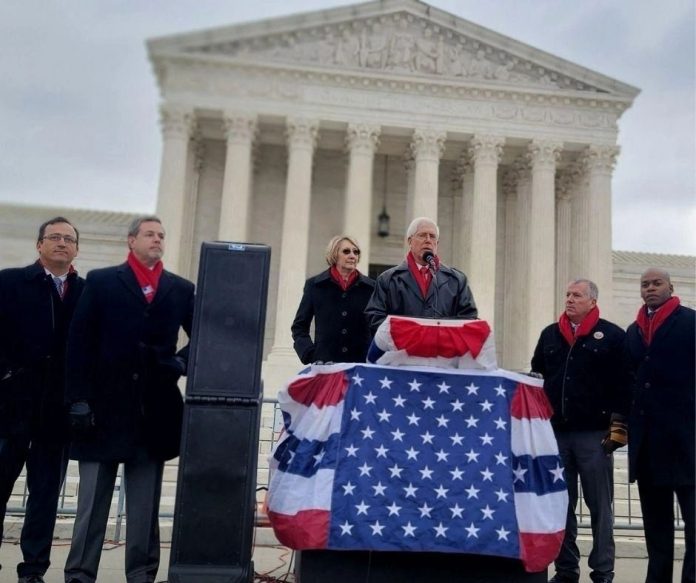 WASHINGTON, D.C. – Liberty Counsel Founder and Chairman Mat Staver presented oral argument today to the U.S. Supreme Court in Shurtleff v. City of Boston, arguing that the City of Boston violated the Constitution by censoring a private flag in a public forum open to “all applicants” merely because the application referred to it as a “Christian flag.”

There are three flagpoles outside City Hall that fly the U.S., Massachusetts and Boston flags, plus a fourth flag on Congress Street, which runs parallel to City Hall. For 12 years from 2005-2017, Boston approved 284 flag-raisings by private organizations with no denials on the flagpoles that it designated as a “public forum.” Had the flag been referred to as anything but Christian, the city would have approved it. The flag itself was not the problem; it was the word “Christian” describing it in the application that was the issue. The year before Camp Constitution’s application (2016-2017), Boston approved 39 private flag-raising events, which averaged three per month. In 2018, Boston approved 50 private flag raising events, averaging nearly one per week. One included a flag of a private credit union.

Boston now argues that despite the policy and longstanding practice, the private flag raisings are actually government speech.

Today, the Supreme Court seemed united in favor of Liberty Counsel’s argument that this censorship is unconstitutional and that Boston was wrong to deny the Christian flag, a white banner with a red cross on a blue background in the upper left corner.

During today’s argument, Boston’s attorney, Douglas Hallward-Driemeier, admitted that if the High Court finds that if the city created a public forum, then Boston has no defense.

When the city’s attorney attempted to justify the policy to fit their agenda, Justice Alito said, “You did some after-the-fact gerrymandering of your policy and reverse engineered it.”

Hallward-Driemeier also stated that the city’s “goal is to foster diversity of communities” and “commemorate events or occasions.”

In response, Justice Clarence Thomas stated that if Christians are not a part of that diversity the city purports to support, “that’s limited diversity.”

Justice Brett Kavanaugh also acknowledged that it seems the Establishment Clause is not the issue in this case since there has not been equal treatment of religious groups or religious speech.

Justice Neil Gorsuch also noted that the city cast religion into the same category as speech deemed offensive by censoring the religious viewpoint.

Liberty Counsel’s Founder and Chairman Mat Staver said, “Today is a historic day and I was honored to present this religious viewpoint case before the U.S. Supreme Court. This case is so much more significant than a flag. Boston cheated when it opened the flagpoles to all applicants and then excluded Christian viewpoints. The city then claimed that the flagpoles never were a public forum despite its history and express policy. The city’s censorship is clearly unconstitutional, and government cannot censor religious viewpoints.” Liberty Counsel is a public law firm and a news partner with the Wyoming News.