Zelenskyy Tells Americans to Suck It Up and Pay, Blacklists Anyone Questioning Scam 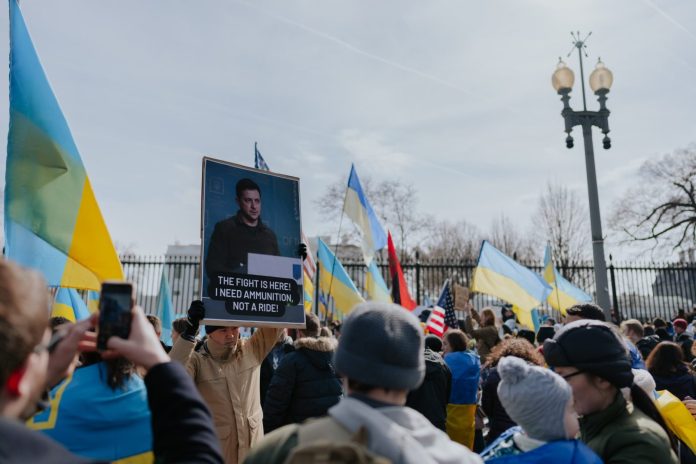 “As long as we are resisting it, the integrity of the United States will continue, therefore we are giving our lives for your values and the joint security of the world. Therefore, inflation is nothing, COVID is nothing. Ask those people who lost their children, their peace, their property at the beginning of the full-scale Russian invasion. Who is thinking about masks and COVID? Who is thinking about inflation? These things are secondary,” corrupt Ukrainian oligarch Volodymyr Zelenskyy told The New York Post last week.

As Americans continue to feel the pain of massive overspending, massive fiat currency printing and an authoritarian government out of control, puppet Ukraine president Zelenskyy says we’re obligated to pay more. And he has the mainstream media publishing his propaganda for him.

Does Zelenskyy care about the men, women and children he’s been killing in his country with years of bombing in the Russian speaking regions of Ukraine?

For those wishing to know what’s happening on the ground in Ukraine, American independent journalist Patrick Lancaster has been on the ground talking to the Ukrainian people. He’s been there for years detailing the slaughter of innocent Ukrainian people at the hands of the Ukrainian government while he constantly speaks to Ukrainians telling a completely different story from what the narrative whores in America are saying.

Regardless of what’s actually going on over there, the real question is does America have an obligation to Ukraine? Zelenskyy, a corrupt oligarch, says we do. The U.S. Constitution and the founding fathers of this nation say absolutely not.

“My oath of office obligates me to defend the United States and that includes defending our country from incurring massive new debt no matter how worthy the cause…. Americans are feeling the pain [from inflation], and Congress seems intent only on adding to that pain by shoveling more money out the door as fast as they can,” said U.S. Sen. Rand Paul (R-Kentucky).

Comments such as that from Paul got him landed on a Ukrainian blacklist. That blacklist was revealed last week, according to Unherd.

This corrupt Ukrainian government agency offered no details on how someone lands on the list, and it appears simply to be anyone who doesn’t fully submit to Zelenskyy. Luttwak, for instance, has argued for more and more American tax dollars to be stolen and handed over to Ukraine, but he’s dared to question the Ukrainians “leaders” for mismanagement in the Russia-Ukraine conflict.

“The exact criteria for inclusion are also unclear, although next to each name the report lists the ‘pro Russian’ opinions the individual promotes,” Unherd reported. “For example, Edward Luttwak’s breach was to suggest that ‘referendums should be held in the Donetsk and Luhansk regions’; Mearsheimer’s breach is recorded as him saying that ‘NATO has been in Ukraine since 2014’ and that ‘NATO provoked Putin.’”

Greenwald responded to being included on the blacklist:

“War proponents in the West and other functionaries of Western security state agencies have used the same tactics for decades to demonize anyone questioning the foreign policy of the US and NATO. Chief among them, going back to the start of the Cold War, is accusing any dissidents of spreading ‘Russian propaganda’ or otherwise serving the Kremlin. That’s all this is from the Ukrainians: just standard McCarthyite idiocy.”

“The Ukrainians have the absolute right to pursue whatever war policies they want. But when they start demanding that my country and my government use its resources to fuel their war effort, then I, along with all other Americans, have the absolute right to question that policy or to point out its dangers and risks. I don’t care at all about Ukraine’s attempts to shut down debate in our country by smearing journalists and politicians who are questioning US/NATO policy as being Russian propagandists. That tactic is as inconsequential as it is cheap, tawdry, and discredited.”

But consider this. As Zelenskyy tells Americans we need to feel more pain for his corrupt government’s purposes, he was also spending time last week posing with his wife to be on the next cover of Vogue.

Martin Armstrong noted that Vogue’s editors “actually permitted the president to wear his favorite green military-issued t-shirt that he parades around in daily like some cartoon character.”

“‘The Art of War’ never mentioned posing for a high-end fashion magazine as a strategy,” Armstrong wrote. “Times have changed. This is a strategic marketing move since he is begging Western politicians for billions of dollars. Volodymyr and (his wife) Olena appear as young and trendy political celebrities who we should root for by turning a blind eye when our elected officials send them our money. There is no need to hold a vote or to question where the money is spent! They are the good guys!”

The effects of “war” don’t seem to be causing much pain at all for Zelesnkyy. Along with posing for propaganda, he’s been meeting with a bunch of American celebrities and going to concerts in a country we’re told a war is going on in.

40,000 National Guard Soldiers could be fired this week for not...