Law Enforcement: Worn Down To A NIBIN 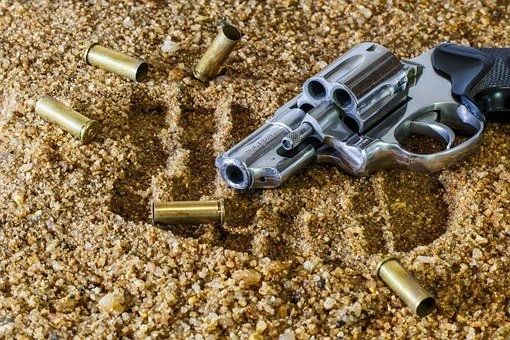 By: Marc Kelley
It has been said by many and thought by the rest of us, what the Government does best, is take something simple and make it complicated. Sadly, it is not difficult to find example after example of this process in our government today. Apparently, it is too much to ask that our politicians to use the brains the Good Lord gave them before they waste our tax dollars enacting new government programs for such pressing issues as: “tree equity” and building electric vehicle charging stations in North Dakota. As ridiculous as these programs may seem, they are indeed included in Biden’s Build Back Better agenda and are at least arguably of some benefit to our country. Yet these examples are far from the worst or dare I say the dumbest ideas to come out of Washington D.C.

2021 by all accounts, was a year we would all like to get behind us. We are now in year three of “two weeks to flatten the curve”, our children have lost nearly two years of education, COVID remains unchecked and out of control, and violent crime has reached record highs in many liberal bastions of tolerance. The “Me Too” movement is dead. Black Lives Matter, except when they are lost to Black on Black crime. The Defund the Police movement is crumbling faster than a jewelry case on the Miracle Mile in Chicago. Our country has once again set all time record highs for gun sales as our politicians continue to fortify their private estates with parapets and armed security. Yes sir, 2021 was indeed a shit show!

In 2021, seventeen American cities experienced record increases in violent crime, with homicide leading those statistics. Chicago itself recorded seven hundred ninety-seven murders resulting from forty-one hundred shootings. Clearly, these numbers reflect a need for some kind of a change in tactics, if not in political leadership. Yet fear not, our ever capable Vice-President, Kamala Harris, knows full well how to turn this situation around. This past week the lame stream media began explaining how the newest, greatest, game changing technology ever developed was now aimed directly at fighting crime.

Several years back, the ATF in concert with the FBI, began developing a database of spent shell casings. Remember those spent casings that were included with the paperwork when you purchased a new firearm. Yep, those little babies are exactly what I am talking about. First championed by then District Attorney Kamala Harris herself in San Fransiko, California, the database was designed to record and store a digital image of tool marks left behind on spent casings after being fired from a handgun. Compiling this database would allow the ATF to compare spent casings recovered at the scene of a shooting, then track those casings back to the original owner of the firearm, utilizing the FBI’s National Tracing Center. So effective would this database be, crimes would practically solve themselves.

To better understand the significance and usefulness of this database, one needs to understand a bit of vocabulary; and again, dare I say, how firearms actually work. Most everyone is familiar with the ballistic fingerprint left behind on a projectile fired through a rifled barrel. The striations found on a fired projectile are the result of the lands and grooves which make up the barrels rifling. The grooves are the spiral cuts made in the barrel itself, while the lands are the remaining ridges between those cuts. These tool marks produce the most widely accepted method for using a ballistic fingerprint to identify a firearm. This method however does have its limitations, namely the need for the slug used for comparison not being totally deformed from impacting an object. If the slug is not recovered or is too damaged for comparison, this process is of very little use in identifying the firearm from which it was fired.

However, the projectile is not the only component which contains tool marks when fired. The spent casing itself offers a myriad of marks which are useful for matching it to a specific firearm. Impressions, scratches, and abrasions on casings are all created as one surface comes into contact with another. It is this reality which drives the idea, creating a national database, which is digitally searchable by law enforcement would be of great help in bringing the criminals to justice. With this thought in mind, the brain trust of the Brandon Administration, under the ever watchful eye of the giggling Marxist herself, just approved another 85 million dollars for funding the National Integrated Ballistic Information Network (NIBIN). Hallelujah, an epiphany, a game changer….well maybe….not so fast.

NIBIN, just like so many other government programs, was conceived by people who are political bureaucrats, most of whom have no experience with firearms, let alone a working knowledge of them. Unlike these political buffoon’s, criminals don’t spend their time attending black tie fundraising events in the D.C. “swamp”, looking down on the little people and reaffirming their belief, they are entitled to be in charge by virtue of their superior intellect. Yet, once again things aren’t always as they seem. Criminals have rarely been accused of possessing superior intellect as defined by academia, but rather, many possess something we call “street smarts.”

It is the concept of street smarts which has given rise to the reality and use of “library guns.” Library guns are not owned by a specific individual, but rather tools utilized by gangs or other criminal elements, which once used, are returned to the “librarian” or keeper of the firearms, where they are stored until needed again. This process results in the same firearm being tied to multiple crimes committed by multiple people over a period of time. The concept is not to protect any one individual; but rather, to muddy the water for the prosecution, if the firearm is actually recovered and booked into evidence. The library gun is a defense attorney’s dream.

So, how does understanding the concept of library guns apply to the NIBIN system, a reasonable person might ask? It’s simple, how long do you think it will take a criminal to understand, if a firearm is used in a shooting, the best defense against NIBIN, is simply dropping other spent casings at the scene? The more brass at the scene, the greater the confusion about the actual weapon responsible for the crime and the more time law enforcement spends chasing down the wrong individual. For a few cents in spent brass, picked up at a local range or traded between gang members, criminals can defeat a multi million dollar database and in the process, wear law enforcement down to a NIBIN.