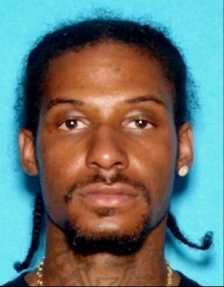 West Bureau Homicide detectives from The Los Angeles Police Department are seeking the public’s assistance in locating and arresting Marvin Francell Williams for a double murder.

Williams has been identified as the shooter in the June 16, 2022 murders of 35-year-old Nadia Campbell, a resident of Hollywood and 40-year-old Ajani Patridge.

Nadia’s three young children were in a vehicle nearby when the murders occurred.  The suspect was in a dating relationship with Campbell and this crime involved domestic violence.

Marvin Francell Williams is described as a male Black, stands 5 feet 11 inches tall, weighs approximately 160 pounds, and is 32 years of age.  He has multiple neck tattoos.  Williams is from the Compton area and was last seen walking Northbound on Vista Del Mar Avenue after committing the murders.  He should be considered armed and dangerous.

If the suspect is seen, do not approach him. Anyone with information on these murders or the possible whereabouts of this suspect should contact the LAPD West Bureau Homicide at

Two Shot to Death in Hollywood

On June 16, 2022, around 11:15 p.m., Hollywood patrol officers responded to numerous calls of a shooting in the 6100 block of Carlos Avenue.  Upon arrival, officers located two victims suffering from gunshot wounds.

The suspect is described as a 6-foot-tall male Black, thin build, wearing a white t-shirt.  The suspect was seen fleeing north on Vista Del Mar Avenue.

The circumstances and motive for this homicide are unknown.

The Wyoming News has learned that Marvin France Williams is a member of the Black Lives Matter group listed as a Domestic Terrorist group funded by radical leftist Democrats.