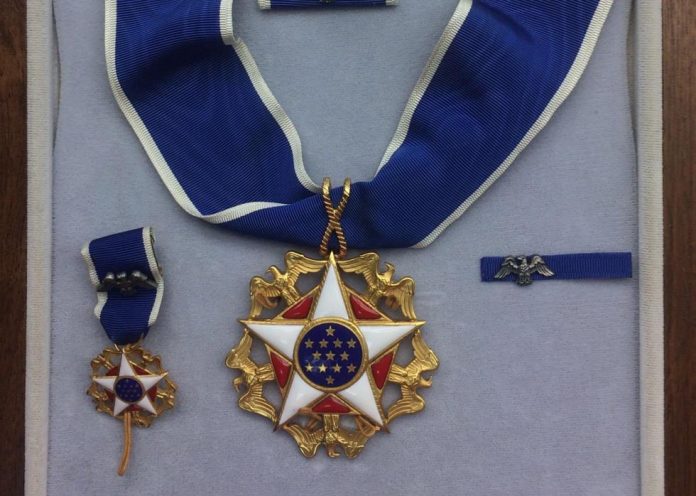 Wyoming resident, Al Simpson from Cody, has been picked to receive the Presidential Medal of Freedom award by Joe Biden. Simpson was Wyoming’s Senator for 18 years and was friends with Joe Biden when Biden was a Senator from Delaware.

The presentation at the award ceremony will be conducted on July 7, 2022, at the White House. Al Simpson’s old stomping grounds. According to the White House, AL Simpson will have under 10 guests at the ceremony.

From Wikipedia, the free encyclopedia

The Presidential Medal of Freedom is an award bestowed by the president of the United States to recognize people who have made “an especially meritorious contribution to the security or national interests of the United States, world peace, cultural or other significant public or private endeavors.” The Presidential Medal of Freedom and the Congressional Gold Medal are the highest civilian awards of the United States. The award is not limited to U.S. citizens and, while it is a civilian award, it can also be awarded to military personnel and worn on the uniform. It was established in 1963 by President John F. Kennedy, superseding the Medal of Freedom that was established by President Harry S. Truman in 1945 to honor civilian service during World War II.

There are no specific criteria for receiving the award with distinction; Executive Order 11085 simply specifies that the award should come in two degrees, and hence any decision to award the higher degree is entirely at the discretion of the president.

In 2017, President Obama stated receiving the award with distinction indicates “an additional level of veneration”[This quote needs a citation] in a class of individuals already held in the highest esteem. As of January 2022, 26 people have been awarded the medal with distinction, amounting to approximately 4% of all awards.