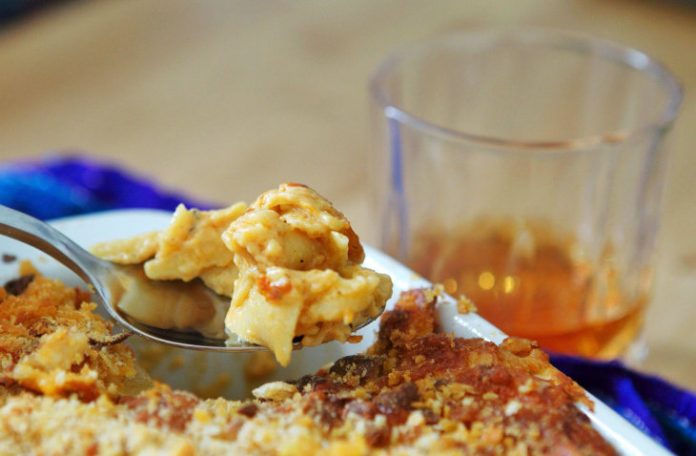 If you’re looking for a comforting dish to bring the spirit of your Ashkenazi ancestors along to your upcoming Fourth of July picnic, I’ve got the kugel for you.

The journey to this recipe started from a very non-Jewish place––the Kentucky Derby. I don’t know about you, but generally abusing horses to run in a circle for the unlikely chance to win a piece of the $3 million purse doesn’t strike me as a very Jewish thing.

Some friends who used to live in Louisville, Kentucky were hosting a little get together for the occasion. Rather than morosely remind attendees that so much as a twisted ankle might get the horse euthanized, I decided to make the most of it by bringing a homemade dish. But what to make?

Mac and cheese is, for better or worse, a go-to staple of Southern cuisine. I thought of other go-tos of the Southern palate, like barbecue sauce and bourbon. Remarkably, I couldn’t find a recipe that blended all of the above. In an era when hundreds of years worth of varying culinary traditions are often thoughtlessly blended together in the name of fusion, I was surprised.

So, I set out to make my own recipe. I started with inspiration from Jake Cohen’s Jew-ish cookbook. Among his kugel recipes he includes a cheese kugel with rosemary and thyme––and it really makes the dish stand out. They’re two spices that pair nicely with smoky flavors, like certain smoked cheeses and barbecue sauce.

In the recipe they went.

Next, I turned to the Internet and YouTube for different ideas on how to build my cheese kugel. For ease, I went with starting a roux (butter and flour cooked together) before layering it with cream, bourbon, and then barbecue sauce. Everything goes into the same pot or skillet.

Then come the cheeses. I’m a fan of mozzarella and cheddar, which happen to be commonplace in mac and cheese or cheese kugel recipes anyhow. What was missing from this recipe was a smoked cheese. I opted for gouda, but as long as you keep the proportion of cheese to noodle the same, you can experiment to your heart’s content.

Speaking of noodles, I use wide egg noodles, which are common with kugels. Once everything is mixed together, add a couple of eggs to help bind everything. Then, cover the dish with matzo meal and even more cheese before throwing it into the oven until the top gets crispy golden brown. Serve and await the flood of praise as friends pick out the different flavors of cheese, rosemary, barbecue sauce, and notes from your bourbon of choice.

Aish.com is an online Jewish Newspaper. Aish is a news partners of Wyoming News.

Christian Business Under Assault For Its Public Faith