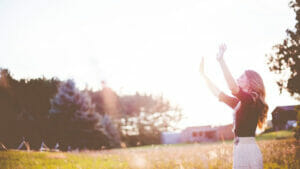 Prayer is a widespread phenomenon despite an apparent trend toward secularism in the 21st century. Jews have been praying three times daily for over two millennia;1 Muslims are obligated to pray five times a day;2 about 68% of Christians pray every day.3 Buddhism is difficult to pin down as it is unclear if Buddhists actually pray, but they do practice meditation, mindfulness, and concentration on a regular basis.4

The Talmud points out that even a criminal prays to God for success in his crime, “The thief prays at the entrance of his tunnel [as he is about to break into a house],”6 and many pray in extreme situations even if this is not their standard practice. As the saying goes, “There are no atheists in a foxhole.”7According to Maimonides, there is a Biblical commandment to pray every day. “It is a positive commandment to pray daily, as it is written, “You shall serve the Lord Your God with all your heart. The Sages said, “What is service to God of the heart? It is prayer…”8 Others see prayer as God’s kindness in listening to us, but only obligatory at times of need.9

Prayer, however, raises a number of questions. Many see prayer as a type of formal complaint to God – a combination of praising, complaining, requesting, and begging. If that is true, the idea that there should be a commandment to do so is quite bizarre. What parent in their right mind would command her children to gripe at all, let alone regularly?

In addition, responding to kvetching is bad parenting. Imagine a child who does not want to brush his teeth and whines so passionately and eloquently that his parents allow him to stop brushing his teeth. Is this effective, responsible parenting? I don’t think so.

Additionally, prayer is philosophically problematic. We believe that God is benevolent and omnipotent, “God is good to all and His compassion is upon all His creations;”10 and nothing can stop Him from doing what He wants;11 He is omniscient, knowing everything.12. Therefore, prayer should not be necessary or even appropriate. Do we think that God made a mistake and that we can inform Him of the correct course of action? Do we believe

that we can convince Him to do other than what He knows to be appropriate? Are we informing Him of circumstances of which He is not aware? What exactly are we doing when we pray?

Rabbi Yosef Albo, a 15th-century Spanish-Jewish scholar and author, wrote, “When a decree of good is decreed upon a person, it is only decreed according to their current moral level. Similarly, when a bad decree is decreed, it is also only according to their current level of evil. When their level changes, so too does the decree – either to the side of good or to the side of bad. Therefore, one is not changing God’s will through prayer because this is exactly His will from the beginning, that the decree should be fulfilled only when the person is on a specific level – and if his preparation or level changes, so the decree changes.”13

Prayer changes us, and when we change, the appropriate Divine decree for that level of spiritual/moral existence is applied to us.

Yosef Albo explains that prayer is, ideally, a transformative experience (or, in the words of Calvin, transmogrifying). By requesting from God, we are forced to evaluate our needs and wants, goals, and use or misuse of our blessings. By expressing appreciation, we can become better people, more humble, appreciative, less selfish, and happier. By praising God, we can evaluate our relationship with Him and consider our moral obligations. So, prayer changes us, and when we change, the appropriate Divine decree for that level of spiritual/moral existence is applied to us.

Laurie Ann Paul, Professor of Philosophy and Cognitive Science at Yale University, notes that it is difficult, if not impossible, to make transformative decisions since we cannot anticipate the effects of the transformation until it occurs. Instead, she suggests weighing the value of becoming a different person against the value of remaining the same person. L. A. Paul, Transformative Experience. Oxford University Press, 2014;

Another transformative aspect of prayer is expressing gratitude regularly. Positive psychologists Tal Ben Shachar and Martin Seligman have demonstrated the transformative power of gratitude – it creates greater optimism and happiness, increases self-esteem, decreases stress and anxiety, and expands one’s capacity for forgiveness. In addition, expressing gratitude to God heightens our spirituality and enables us to see something bigger than ourselves.

These ideas are hinted at in Jewish practice. The Code of Jewish Law14

states that one should not take a shortcut through a synagogue, an apparent law respecting the sanctity of the place. However, if one prayed in the synagogue, then it is not only permitted but “obligatory to exit through a different door from which one entered.”15

I think that the idea here is that when we have prayed in the synagogue, we presume that the person who exits through Door B is not the same person who entered through Door A. Therefore, one is not actually making a shortcut of the synagogue because the one who leaves is not the same as the one who entered. Those who maintain that it is obligatory believe that this is a way of impressing upon us this idea of transformative prayer and reminding us that the experience should change us.

The Hebrew language also expresses this idea. The noun for prayer is tefilla. The verb of prayer, “hitpallel,” is always in the reflexive form, i.e., a verb that is an action done to oneself. Rabbi Samson Raphael Hirsch explains the use of this grammatical form: “Hitpallel,” from which “tefilla” is derived, originally meant to deliver an opinion about oneself, to judge oneself – or an inner attempt at so doing. In other words, an attempt to gain a true judgment of oneself. Thus, it denotes stepping out of active life to attempt to gain a true judgment about oneself, that is, one’s ego, one’s relationship to God and the world, and of God and the world to oneself. It strives to infuse mind and heart with the power of such judgment as will direct both anew to active life – purified, sublimated, and strengthened. The procedure of arousing such self-judgment is called “tefilla.” In English, we call tefilla “prayer,” but this word only incompletely expresses the concept for “to pray,” i.e., to ask for something, is only a minor section of tefilla.”16

I would encourage you to set aside a few moments a day to think about what you really need or want in life, to be grateful for what you already have, and to contemplate your relationship with the Creator.17