Second bison attack of the year recorded at Yellowstone this week 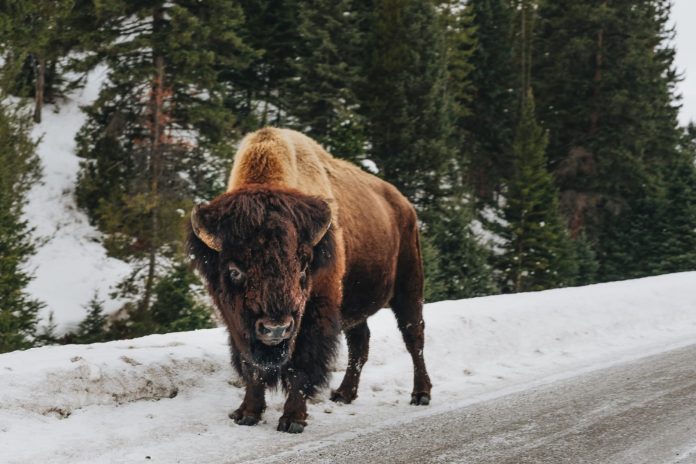 A 34-year-old man from Colorado was gored by a bison at Yellowstone National Park as he is seen in a video saving a child in the bison’s charging path.

The incident occurred on Monday, and it happened near the Giant Geyser at Old Faithful, according to a statement from the park. The park had only recently reopened, a little over a week earlier, after flooding had shut down the park for several days.

TMZ published a video of this week’s incident. The video, taken from a distance, showed a bison charging a family walking on a boardwalk. The bison stops short of the family on the initial charge before then charging the young child, but the 34-year-old man is seen stepping in to save the child from the bison’s path before being gored himself.

A statement from Yellowstone read: “Family members did not leave the area, and the bull bison continued to charge and gored the male. The male sustained an injury to his arm and was transported by ambulance to the Eastern Idaho Regional Medical Center.”

The injured male’s name and condition was not released by Yellowstone.

It is unknown from the video if the bison charge was provoked or not, and Yellowstone stated the incident remains under investigation.

Yellowstone also stated: “This is the second reported incident in 2022 of a visitor getting too close to the animal and the bison responding to the perceived threat by goring the individual.”

The first incident of this year occurred only a month earlier on May 30 when a 25-year-old Ohio woman was gored and tossed 10 feet into the air resulting in injuries.

The National Park Service’s (NPS) Yellowstone webpage states: “Bison have injured more people in Yellowstone than any other animal. Bison are unpredictable and can run three times faster than humans. Always stay at least 25 yards (23 m) away from bison.”

For visitors to the park, the NPS states to never approach wildlife, stay on boardwalks and trails in thermal areas, never feed wildlife and never park in the road or block traffic.

For nearly all wildlife, including bison and elk, the NPS advises to stay at least 25 yards away. It advises 100 yards of distance from bears and wolves.

Yellowstone’s bison population is between 2,300 and 5,500 based on two subpopulations (Lamar Valley and Hayden Valley), according to the NPS. It states that the “bison is the largest land mammal in North America” with males weighing up to 2,000 pounds and females up to 1,000 pounds. They can run up to 35 miles per hour.