Buffalo Bill Center Of The West Under Multiple Law Suits 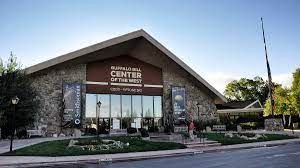 What a hot mess! The Buffalo Bill Memorial Association claims to be a “non-profit” does business as the Buffalo Bill Center of the West, which is for “PROFIT” ? Try and wrap your head around that and figure that one out! Or are they “non-profit as well?

Two of the items that the Buffalo Bill Center of the West refused to return to her were two (2) tapes, called Super 8 films of a July 4 parade that took place back in 1976, when John Wayne was the Grand Marshal and also visited the museum when it was called the Buffalo Bill Historical Center.

These two films that they stated that they did not have but that they did have—were valued at over $70,000.00 and estimates suggest that they may well be worth at least $100,000.00 per tape, according to today’s market value, with anything to do with John Wayne, commonly called “The Duke.”

Was the Buffalo Bill Center trying to steal them? or were they just being hateful to the former employee Bonnie Smith.?

According to some of the visitors who have tried to visit the museum in the past during the covid mask mandate, they reported to the Wyoming News that they were treated very badly by some of the security guards due to what they believed was because of the color of their skin.

These individuals stated that they are talking with legal counsel about filing a class-action suit against the Museum for the way they were treated by staff security at the Museum and according to sources there is a list of others whom are upset at the treatment they got also. All of these individuals are of “color”. Is there theme here?

So it would appear to an outsider that problems exist at the Buffalo Bill Center of the West.

In Bonnie Smith’s case, evidence was filed in court that shows that the BBCOW, did take control of the films on Sept. 25, 2014, to preserve and digitization of the tapes, or so that is what they claimed. But that was not what they did. Court records show that as of the filing Jan. 25, 2021, the Buffalo Bill Center of the West refused and denied that they even had the tapes and denied Bonnie Smith the return of her own private property.

Does this sound like some one on the board or possible employee high archae ladder, was deliberately attempting to steal the tapes?

At the very least, to deny the right full owner Bonnie Smith, her own property not being returned to her after she was fired. This is just wrong on all levels.

Certainly not the way to conduct business, not to say that it may have been totally an illegal action.

In Court documents, a list of personal items were listed outlining personal property the Buffalo Bill Center still were in possession of and the exact location of those very items the day she was fired.

Many items were returned later, but most of the items were not returned, according to the Law suit.

The BBCOW was put on notice on April 3, 2019, that they were “unlawfully holding.’

In english this is called THEFT.

The Lawsuit sought no punitive damages or monetary compensation, just that the Plaintiff Bonnie Smith wanted her property back in her custody.

The Buffalo BIll Center of the West is being sued in federal court. Why? This case again deals with employment discrimination and wrongful termination against some current employees and some former employees.

In this case in federal court, the complainant alleges that the Buffalo Bill Center conducted and operated with a history of age and gender discrimination, personal vendettas, political retaliation for being a whistle-blower, reporting unethical practices to the proper agencies.

Defendants in this case are the following individuals and entities:

Buffalo Bill Center of the West.

Accusations were made against each defendant by the Plaintiff regarding Plaintiff’s employment. Each of the individuals allegedly are responsible for illegally ousting plaintiff from the Plaintiffs job by making up false allegations against the Plaintiff, according to Court documents.

These varied defendants posted public photos of the Plaintiff in view of the public after the Plaintiff’s termination, this was done as a retailtory move by defendants, allegedly.

The allegations made by the Plaintiff in the federal court use the terms “Fraudulent” in their illegal actions to silence and stop Plaintiff from Plaintiff’s employment. The defendants listed are accused of miss conduct and intentional reckless disregard for the accountability, and under such circumstances and conditions, that a reasonable person would know, or have reason to know, that conduct would, in a high degree of probability, result in massive harm to another.

Based on these two lawsuits against the Buffalo Bill Center of the West, apparently this is not a good place to work, as far as some in the public are concerned. Furthermore, it has come to the attention that this entity is a very liberal Democrat snake pit, according to sources in various political circles.

No calls have been returned to the Wyoming News from the Buffalo Bill Center of the West regarding the multiple law suits against them.