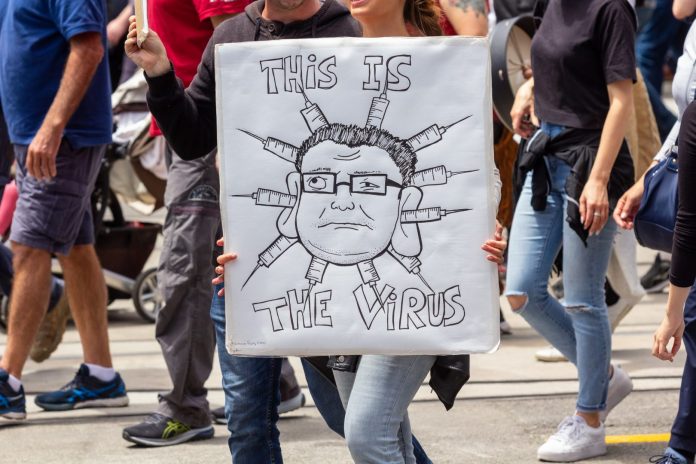 New polls conducted by the polling firm Pollfish of American households show that the experimental COVID gene therapy shots has killed more than double the number the “virus” itself has.

The July 2 poll also asked questions related to efficacy, or lack thereof, of the jabs. Those who answered if they contracted COVID before or after submitting to the experimental shots showed that 60.6% contracted the “virus” after being jabbed.

Steve Kirsch, executive director for VSRF, noted on his Substack page that Pollfish is an independent, third-party firm and nearly 75% of poll respondents were jabbed, meaning they can hardly be labeled anti-vaxxers.

Kirsch added: “I predict silence from the medical community, the mainstream media, Congress, and the government agencies. Not even 60 Minutes is going to touch this data with a ten foot pole. Nobody will. They will just ignore it just as they have for my earlier polls.”

This is just recent polling commissioned by VSRF, and Kirsch suggested the next step is polling 5,000 households.

Why is such polling important? Because it provides a more reliable snapshot of what is occurring when we absolutely know we cannot trust “official” data from the government, Big Pharma and the Medical Industrial Complex.

Case in point, the Vaccine Adverse Events Reporting System (VAERS) maintained by the Centers for Disease Control (CDC). The most recent data, released on Friday, showed 29,162 reported deaths due to the jabs.

However, Wyoming News has reported that the CDC itself admits that VAERS undercounts adverse events by a factor of 6X while independent studies show an undercount of up to 41X. That would put the likely death count by the jab somewhere between 174,972 and 1,195,642.

Keep in mind, the government is claiming just over 1 million Americans have died from COVID. Those numbers are certainly unreliable for many reasons. Keep in mind, it has been proven that hospitals and local governments were incentivized to label deaths COVID, which led to incidents where deaths from car and motorcycle accidents were actually labeled COVID deaths and local coroners actually publicly justified it claiming COVID could have impaired the drivers.

It’s also unreliable data because the PCR tests used by the government to allege people had COVID are completely unreliable.

Kary Mullis was the Nobel Prize winning inventor of the PCR test. He died prior to the COVID scam, but he previously called out the fraudulent use of the PCR test by Anthony Fauci over AIDS when the test was never meant to diagnose viruses or diseases.

“Guys like Fauci get up there and start talking, and he doesn’t know anything really about anything, and I’d say that to his face. They make up the rules as they go. They change them when they want to and they smugly… like Tony Fauci does not mind going on television, in front of the people who pay his salary, and lie directly into the camera,” Mullis said years ago.

Mullis has also said: “If they could find this virus in you, at all, the PCR, if you do it well, can find almost anything in anybody. It starts making you believe in the sort of Buddhist notion that everything is contained in everything else because if you can amplify one single molecule up to something you can really measure, which PCR can do, then there’s just very few molecules that you don’t have at least one of them in your body …. (PCR) is just a process to make a whole lot of something out of something. It doesn’t tell you that you are sick, it doesn’t tell you that the thing you ended up with was really going to hurt you.”

As for Kirsch, he says the continued evidence and findings that the jabs are unsafe and ineffective paint a damning picture for the medical industry and mainstream media, politicians, bureaucrats and corporations as they continue to pimp for the shots.

“The numbers are very troubling,” Kirsch wrote. “Unfortunately, nobody in the medical community is listening. They don’t want to gather any of this data or know it exists. But for everyone else, these numbers are important because they show very clearly just how dangerous the COVID vaccines really are and how corrupt the medical community is for ignoring these numbers.”

Kirsch added: “Anyone in the medical community could do surveys like I’ve done. But they won’t. The CDC won’t either. And that tells you everything you need to know, doesn’t it?”