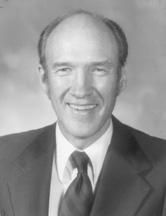 The Wyoming News was the first to report that Alan Simpson was vacationing in California Friday July 16, 2021 and was walking with a group of people when some one made a comment to Al Simpson.

The 89-year-old Simpson turned to address the individual, lost his balance, falling to the ground, landing on his left butt cheek.

89-year-old Alan Simpson, a Cody, Wyoming resident, had to have a partial hip replacement and will be in Rehab for about two or three weeks depending on the speed of his recovery and physical rehabilitation treatment.

The Wyoming News Spoke to Collin Simpson, Al Simpson’s Son, who was with his father in the hospital.

Alan Kooi Simpson, an American politician for the State of Wyoming is a member of the Republican Party Alan Simpson represented the state of Wyoming in the United States Senate and served as co-chair of the National Commission on Fiscal Responsibility and Reform

Simpson, being 6’7″ in height, towered over many of his opponents in the Senate. Born September 2, 1931 and now at the young age of 89-years-old, Alan Simpson, now retired, spends his time with his wife, Ann and enjoys his time with his Son Colin, William and Daughter, Susan, and, of course, all the grand children.

Simpson was a strong presence in the U.S. Senate during his two decades in Washington. The son of former U.S. Senator and Wyoming Gov. Milward Simpson, the Cody attorney and 12-year veteran of the Wyoming Legislature rose to the U.S. Senate in the 1978 election, there he serve the state of Wyoming and it’s people for nearly two decades in Congress having multitude of roles, including a decade-long stint as the Republican Whip.

Today, Simpson still serves an enormous role with the Wyoming’s politics, and participated in many various panels and boards in the state of Wyoming always encouraging political civility, in Wyoming’s politics.

Simpson paved the way for a younger generation to pick up the patriot flag in hopes that they serve the state of Wyoming with as much passion that he had for the people of Wyoming and still has to this day.

Simpson plans on returning to his home city in Cody, Wyoming, as soon as he is able. The Wyoming residents send to Alan Simpson their get-speedy recovery wishes to the former Wyoming Senator. Back in 2020 Simpson suffered a minor stroke but recover from that.